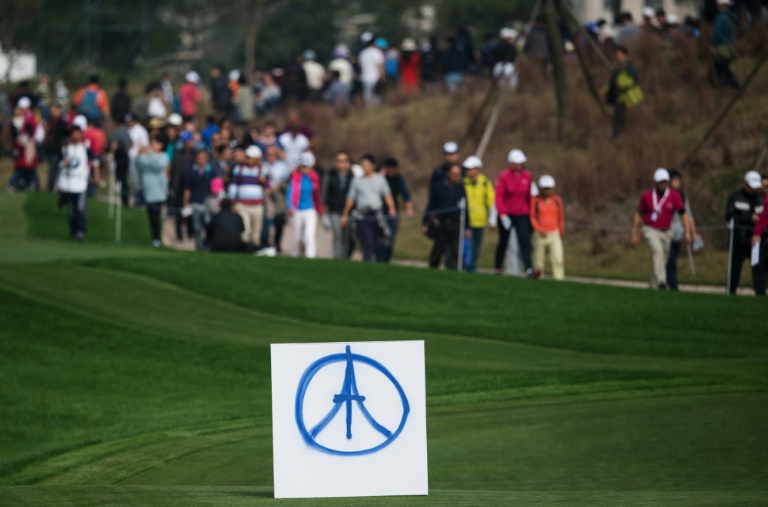 Europe’s top golfers halted their final rounds in the BMW Masters in Shanghai at midday (0400 GMT) Sunday to observe a minute’s silence in tribute to the victims of the Paris attacks.

As airhorns sounded to mark noon, all 78 players, caddies, officials and thousands of Chinese spectators at the flagship European Tour event stood in silence to honour the memory of the more than 120 victims of Friday’s multiple attacks.

Players and caddies to a man wore black ribbons for the second day in succession.

Among the seven French golfers at the tournament, Benjamin Hebert displayed his own tribute with “Pray for Paris” written boldly on his white cap in black marker pen.

A few sponsors’ signboards dotted around the Lake Malaren Golf Club fairways had been sprayed by spectators with the “Peace for Paris” symbol combining the Eiffel Tower with the peace sign.

On the sixth tee, overnight leader Thongchai Jaidee of Thailand removed his cap and bowed his head as silence enveloped the course, as did playing partners Sergio Garcia of Spain and An Byeong-Hun of Korea.

The world number seven Henrik Stenson of Sweden, who was dressed entirely in black, took off his headgear and closed his eyes in silent contemplation on the nearby seventh green.

Muted applause rang around the course at the end of the silence which was impeccably observed at the venue on the outskirts of the eastern Chinese metropolis.

In Shanghai city centre, the Oriental Pearl Tower which dominates the famous Huangpu river skyline was on Saturday night illuminated in the red, white and blue of the French tricolour as the city of 24 million people paid its own tribute.