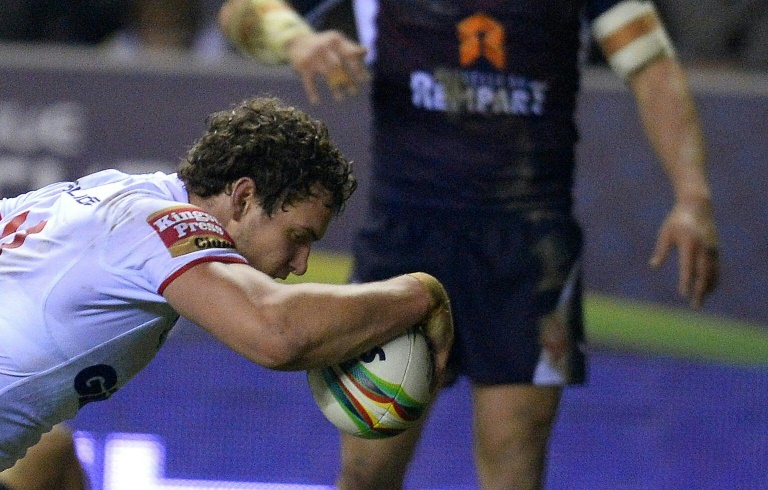 Elliott Whitehead scored two tries as England survived a New Zealand fightback to beat the Kiwis 20-14 in the third and final Test in Wigan on Saturday for a 2-1 series win.

Victory gave England their first series success since 2007 when the then Great Britain, as they were known at the time, beat New Zealand 3-0.

Whitehead â€“ who will join Australian NRL side the Canberra Raiders next season â€“- had never before crossed for a try in international rugby but scored one in each half at a rainswept DW Stadium, the home of English north-west rugby league giants Wigan.

Jason Nightingaleâ€™s superb finish on the stroke of half-time kept the Kiwis in the game but when England skipper Sean Oâ€™Loughlin crossed late on it seemed a home win was assured.

But not for nothing are New Zealand the number one side in the world and late tries from Roger Tuivasa-Sheck and Jordan Kahu set up a dramatic finish.

The visitors’ fightback, allied to narrow defeats by the Kiwis in both the 2013 World Cup semi-final and the 2014 Four Nations, shredded the nerves of England fans but their side held out.

“New Zealand are number one in the world for a reason but we managed to get the win,” England stand-off Gareth Widdop told the BBC.

“It has been a long time for a series win but we have put in hard work over the last few years and it has come off. Both teams played great but we held on.”

New Zealand’s Adam Blair, whose side were missing several first-choice players, added: “Discipline was the difference in the end. The English boys had an outstanding series.”

Steve McNamara knew his reign as England head coach would likely be decided on the 80 minutes of this match.

Having sprung into life in the first Test in Hull to seal a comfortable 26-12 win, England had crumbled at London’s Olympic Stadium as the Kiwis levelled the series with a 9-2 victory last weekend.

And for the the decider, McNamara opted to roll the dice with his selection as debutant Jermaine McGillvary came in on the right wing and Matty Smith at half-back on his home ground.

Much like the start of the second Test, England took the points when they were on offer early on as Widdop rewarded some early pressure with a penalty.

Despite the wet conditions, both sides showed admirable ambition with ball in hand and, after the Kiwis had a scored ruled out on the 20-minute mark, it was England who grabbed the gameâ€™s first try.

The recalled Smith â€“- playing his first game for England in over a year â€“- had already shown touches of class in his kicking game when he laid a perfect grubber on for Whitehead to collect and dive over the line.

Widdopâ€™s conversion made it 8-0 and the Kiwis badly needed the next score before the interval to give them a foothold.

It was Nightingale who provided it, the Kiwi winger going airborne in the left corner to evade Zak Hardaker and acrobatically ground the ball.

Isaac Luke curled the conversion over and England reached half-time with only a two-point lead at 8-6.

As the weather worsened, the Kiwis dominated territory but were unable to pierce England’s defence.

And just after the hour mark Whitehead made them pay, the forward stepping past Kahu and fending off Kevin Proctor for a fine close-range score.

Widdop’s extras put England eight points clear and then it looked like man of the series Oâ€™Loughlin had sealed the victory by charging between the posts for the hostsâ€™ third score.

But there was still time late on for Tuivasa-Sheck to profit from yet more Nightingale magic to go over.

When Kahu also crossed, sliding onto a fine cross-field kick from Kodi Nikorima, it set up a frantic finish but England held their nerve.