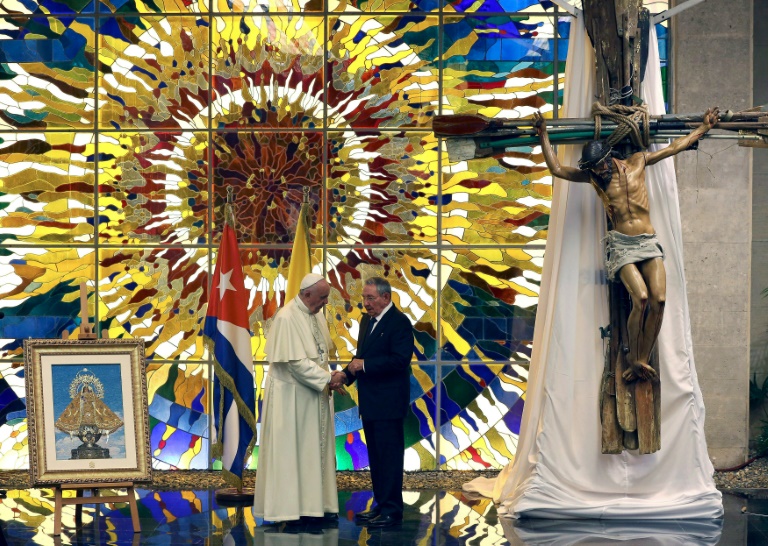 Pope Francis has given a symbolic crucifix he received from Cuban leader Raul Castro to the Italian island of Lampedusa, which has become a hub for migrant arrivals, an Italian cardinal said Friday.

The giant cross, 3.6 metres (nearly 12 feet) high, presents Jesus crucified on wooden oars bound up by rope, to symbolise the harsh reality of migrants who have crossed, or failed to cross, seas aboard unseaworthy vessels.

It is the work of Cuban artist Alexis Leiva Machado, who goes by the name Kcho.

Castro, brother of iconic Cuban communist leader Fidel Castro, gave the crucifix to Pope Francis during his visit to the Vatican in May.

Vatican spokesman in Havana, Federico Lombardi, explained that the cross symbolises the often tragic fate of those who left the island of Cuba by boat to reach the United States.

The crucifix will be displayed in the Church of the Holy Cross in Agrigento on the neighbouring island of Sicily from next month then be taken on a tour of the diocese before taking up its final residence in the parish church of Lampedusa.

The tiny Mediterranean island of Lampedusa was the first place in Italy that Pope Francis chose to visit after becoming pontiff in 2013.

It is part of the Sicily archdiocese of Cardinal Francesco Montenegro of Agrigento, who announced the pope’s move, and has become one of the main points of entry into Europe for migrants fleeing conflict and poverty in the Middle East and Africa.

The implosion of Libya and civil war in Syria are among the main factors that have helped push the flow of would-be refugees seeking sanctuary in Europe to unprecedented levels.

In October 2014 more than 360 Africans perished on a burning, sinking ship off Lampedusa, in one of the worst such tragedies of what has become Europe’s biggest migrant crisis since World War II.

Pope Francis visited Lampedusa in July 2013 to show solidarity with the migrants who had crossed the Mediterranean and to mourn those who had lost their lives in the attempt.

The pontiff has decried the “globalisation of indifference” and the refusal of richer nations to welcome the refugees.