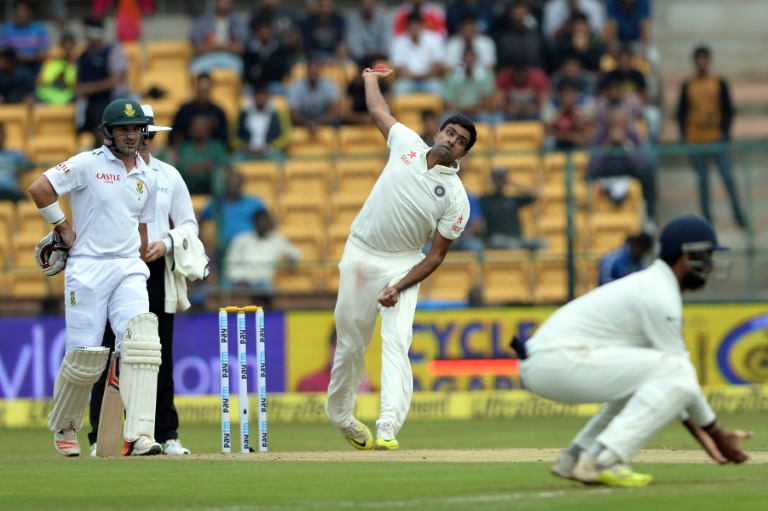 India’s spin twins Ravichandran Ashwin and Ravindra Jadeja shared eight wickets as South Africa crumbled for 214 on the opening day of the second Test in Bangalore on Saturday.

AB de Villiers marked his 100th Test with a stroke-filled 85 to bolster the score after Indian captain Virat Kohli won the toss and elected to field in overcast conditions at the Chinnaswamy stadium.

Opener Dean Elgar’s 38 was the next highest score as the top-ranked Proteas, who lost the first Test in Mohali by 108 runs, once again floundered against the spinners on a pitch that held no demons.

India replied with 80 for no loss by stumps with Murali Vijay unbeaten on 28 and Shikhar Dhawan finding form with 45 not out after being dismissed for a pair in Mohali.

South Africa, aiming to bounce back in the four-Test series, were reduced to 120-5 before being dismissed in just 59 overs during the post-tea session to hand India the early advantage.

Off-spinner Ashwin wreaked havoc with the top order by claiming three of the first five wickets, including two in his opening over when he was brought on to bowl the eighth over.

Ashwin finished with four for 70 to build on his eight-wicket match haul in the first Test.

Left-armer Jadeja, who also took eight scalps in Mohali, returned with four for 50, including the important wicket of de Villiers off the last ball before tea.

De Villiers hit 11 boundaries and a six, before wicket-keeper Wriddhiman Saha dived in front of the stumps to pick up a low catch.

— “Too many soft dismissals” —

South African coach Russell Domingo blamed the batsmen for the low total, saying there was nothing in the wicket to suggest another bowler-dominated game.

“There were far too many soft dismissals from us,” he said. “The pitch was fine. We just did not play well.”

Domingo, however, did not rule out a turnaround in the Test.

“At the moment we are obviously too far behind in the game, but things can change fast because six to seven wickets can fall in a session.”

De Villiers walked in at 45-3 to generous applause from some 23,000 fans who regard him as one of their own due to his stint with the Bangalore team in the Indian Premier League.

He got off the mark with five runs, courtesy of an overthrow by Indian captain Virat Kohli that raced to the fence.

De Villiers, who went to lunch unbeaten on 19, brought up South Africa’s 100 with a superb cover drive off fast bowler Varun Aaron and reached his half-century with a single off Ashwin.

Ashwin praised de Villiers’ effort but felt the star batsman was not at his best.

“AB is a world-class batsman and played his strokes, but I thought he was a bit edgy today,” the off-spinner said.

“There was not much for us in the pitch but we bowled well. Even when AB was batting, we were able to maintain control by taking wickets at the other end.”

Ashwin trapped Stiaan van Zyl (10) leg-before with his second delivery and had Faf du Plessis (0) caught at short-leg by Cheteshwar Pujara off the fifth to make it 15-2.

Aaron claimed the key wicket of Hashim Amla (7) in the 15th over, uprooting the captain’s off-stump as the Proteas were reduced to 45-3.