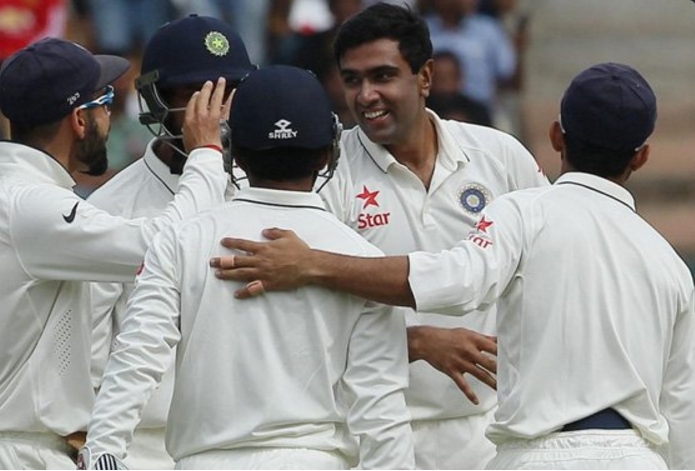 Invited to bat, South Africa were all out for 214 in their first innings on day one of the second cricket Test against India, here today.

AB De Villiers top scored for the Proteas with his 85-run knock while Ravindra Jadeja (4/50) and R Ashwin (4/70) shared eight wickets between them.

Earlier, AB de Villiers stood tall amidst ruins in his 100th appearance as Indian spinners dominated the proceedings, reducing South Africa to a miserable 177 for seven at tea on the opening day of the second cricket Test on Saturday.

De Villiers was out off the last delivery before tea after scoring a stylish 85 off 105 balls with 11 boundaries and a six. It was Wriddhiman Saha, who effected a brilliant catch running forward off Ravindra Jadeja’s bowling.

Ravichandran Ashwin (3/53) and Jadeja (3/36) shared the bulk of spoils as most of the Proteas batsmen were out playing poor shots.

More than turn on offer from the pitch, it was execution that brought downfall of Hashim Amla and Co as De Villiers showed his teammates how to negotiate a sub-continental track.

De Villiers came out to a standing ovation from the Chinnaswamy crowd with the now familiar chants of ‘ABD ABD’ reverberating across the stands.

With Aaron working up good pace, it was some anxious time for the South Africans as 50 came up in the 17th over. De Villiers’ first release shot was a boundary off his hips off Aaron.

When Ashwin dropped one short, he rocked back and smacked it through the square leg region as they went into lunch at 78 for three.

The standout shot came in the post lunch session in the form of an off-drive off Ishant Sharma’s bowling. It was played with effortless ease. Later when he was in his 70’s, he clobbered Ishant over extra cover for another boundary.

India’s fastest bowler Aaron was also hit for back to back boundaries. First a juicy full toss was dispatched through covers and then bisected one through the region between point and gully.

De Villiers then square cut Aaron for his eighth boundary. He glided one from Ashwin towards backward square leg region to complete his 38th Test half century in 59 balls. When Jadeja tried to flight one, he used quick footwork to good effect as he cover drove the left-arm spinner for a boundary.

He was unruffled at one end despite losing partners at the other end.

The partnerships he had for the 4th, 5th and 6th wicket stands were 33 with Dean Elgar (38), 42 with JP Duminy (15) and 39 with Dane Vilas (15). None of them could show the gumption for a fight as South Africa’s premier batsman fought a lonely battle.

It was Ashwin, who was undoubtedly the best Indian bowler on view. The Tamil Nadu tweaker was introduced into the attack in the 8th over after Stuart Binny hardly troubled the openers after being entrusted with the duty of sharing the new ball with Ishant.