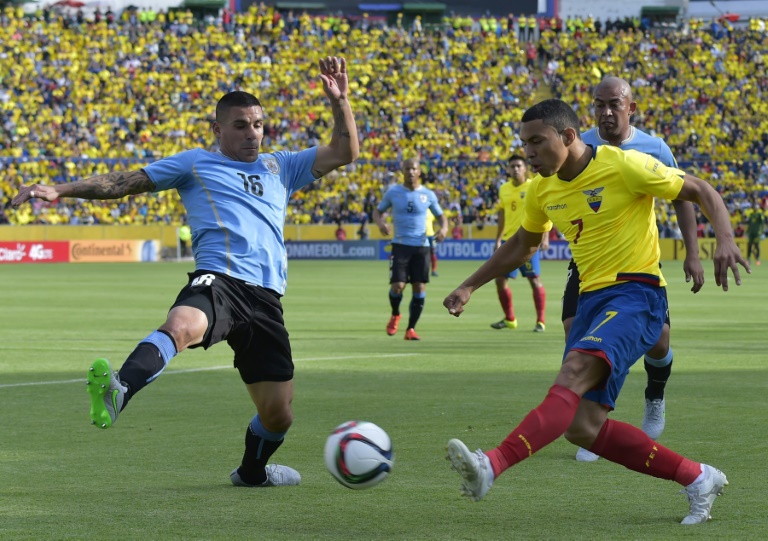 Ecuador, who opened their qualifying campaign with a stunning upset of Argentina in Buenos Aires last month, took another three points after Fidel Martinez’s second-half winner.

The victory left Ecuador with nine points after three games of South America’s marathon qualifying tournament for the 2018 World Cup in Russia.

The Ecuadorans are bidding to qualify for their second World Cup finals in a row after reaching the 2014 tournament in Brazil, where they were eliminated in the first round.

Uruguay, missing suspended superstar Luis Suarez — still serving a ban for his infamous bite at the 2014 World Cup — struggled to contain a vibrant Ecuador side, comfortable in the challenging thin Andean air of Quito, some 9,000-feet above sea level.

Ecuador took the lead on 23 minutes through Felipe Caicedo, the Espanyol striker coolly tucking away a low cross from Juan Paredes on the right flank.

But Ecuador regained the lead only 10 minutes later however through an opportunistic strike from Martinez.

Swansea City forward Jefferson Montero was the catalyst, cutting in purposefully from the left flank and unleashing a fierce low shot towards Fernando Muslera.

Muslera could only parry the shot into the path of Martinez, who jabbed home the rebound to trigger wild celebrations in Quito’s Atahualpa Stadium.

Ecuador will now aim to secure a fourth consecutive victory when they travel to Venezuela next Tuesday.

Venezuela, who lost their opening two matches last month, suffered a third defeat earlier Thursday when they slumped to a 4-2 defeat to Bolivia in La Paz.