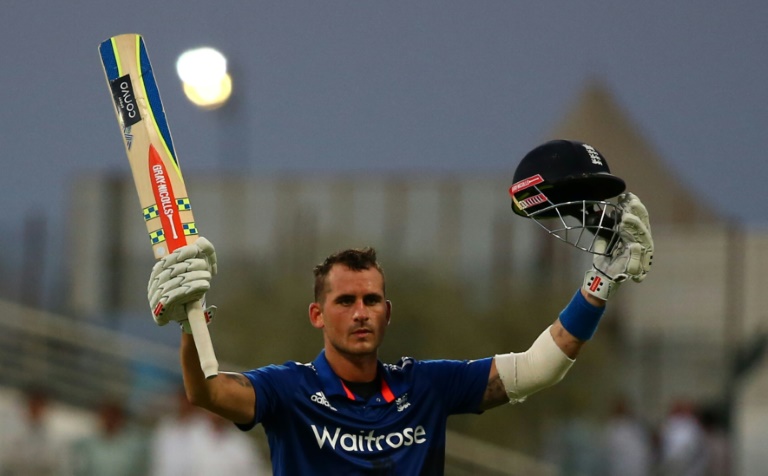 Swashbuckling opener Alex Hales cracked his maiden one-day international century to lift England to 283 for five in the second match of their series against Pakistan in Abu Dhabi on Friday.

The right-hander scored 109 off 117 balls studded with seven boundaries and three sixes after England won the toss and decided to bat in the day-night international at Sheikh Zayed Stadium.

Hales added 102 for the first wicket with Jason Roy (54) and another 114 for the second with Joe Root (63) as England, seeking to level the four-match series after losing the first game, put up a challenging total.

England were off to a confident start on a pitch used for the second match in a row, as Roy and Hales lifted the tempo after the first 10 overs.

Roy smashed two boundaries off paceman Wahab Riaz to bring up his third one-day fifty off 53 balls but four runs later miscued a drive and was caught by Shoaib Malik off Riaz who finished with 3-43.

Hales continued in aggressive fashion, improving on his previous best of 67 made against New Zealand at Nottingham earlier this year, clobbering two sixes off leg-spinner Yasir Shah.

He successfully challenged Pakistani umpire Shozab Raza’s decision of caught behind off Riaz when 48 and paddle-swept debutant Iftikhar Ahmed for two to reach three-figures off 111 balls.

He was finally stumped off Iftikhar by Sarfraz Ahmed in the 39th over.

Root added 40 for the third wicket with Eoin Morgan (29) before Riaz returned for his second spell to hit Root’s leg stump with a slower one.

Jos Butler was cleaned up by Riaz for 11 as England managed just 27 runs in the last five overs.

Pakistan made two changes from the line-up of the first game, bringing in Mohammad Rizwan and Iftikhar for the now retired Younis Khan and Bilal Asif.