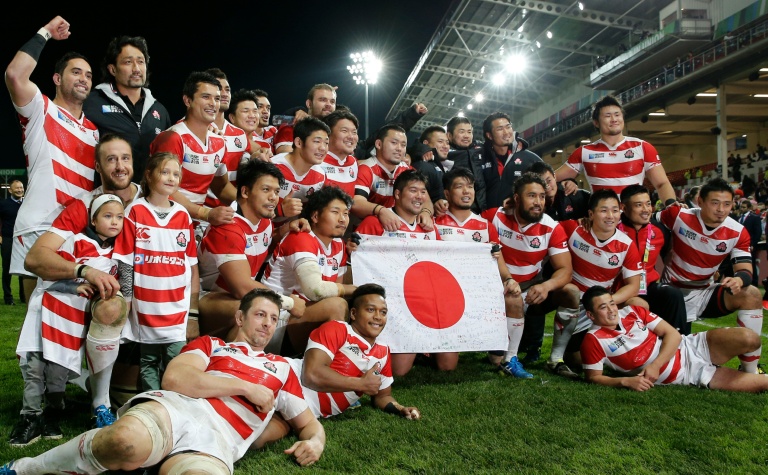 New Zealand Rugby said Friday it was premature to speculate about Japan joining the Rugby Championship, particularly since there were already concerns about its preparations for the expanded Super Rugby competition next year.

The sport is currently on a high in the Asian nation after the Brave Blossoms’ exploits at the World Cup, which included a stunning 34-32 win over South Africa.

With Japan set to host the next edition of the tournament in 2019, World Rugby is keen to consolidate its popularity in a large and potentially lucrative market.

The governing body’s chairman Bernard Lapasset said on a trip to Tokyo this week that Japan should join the Rugby Championship, which currently comprises New Zealand, Australia, South Africa and Argentina.

But New Zealand Rugby chief executive Steve Tew said a more immediate concern for Japanese rugby was fielding a competitive side in the provincial Super Rugby competition in 2016.

“I saw Bernard’s insightful views on that (the Championship) — at the end of the day we’re all very excited by what the Japanese achieved at the Rugby World Cup,” Tew told reporters.

“But we remain pretty nervous about their readiness for Investec Super Rugby and that’s their next step forward.”

Super Rugby will expand from 15 to 18 teams next year, with newcomers from Japan and Argentina bolstering the numbers alongside South Africa’s Southern Kings.

While Japan’s Tokyo-based team have a name, the Sunwolves, Tew said other crucial details were yet to be finalised.

“They haven’t announced a coach yet, so that’s clearly an issue, and they haven’t got the player roster completely full,” he said.

“So they’re the two issues where they’ve got to put their foot on the throttle.”

The Sunwolves are scheduled to play their inaugural match against South Africa’s Golden Lions on February 27 at Tokyo’s Prince Chichibu Memorial Stadium.

Tew believes the still-unnamed Argentinian side was likely to be competitive.

“On the upside, it looks like the Argentinian team will be in very, very good shape, very well organised, and with a very strong playing roster,” he said.

“They might actually be a considerable worry (to rival teams).”

The Rugby Championship expanded in 2012 to include Argentina and exposure to top-class opposition is credited with dramatically improving the Pumas, who reached the semi-finals of this year’s World Cup.

Tew said further expansion was a long-term option but there were no guarantees about when it would take place or which nations would be included.

“That might just be Japan (but) we’ve got the whole of South America, Asia and the west coast of the United States to consider in terms of long-term future,” he said.

“It’s far too early to start talking definitively about any other countries joining the Rugby Championship in the short term.”