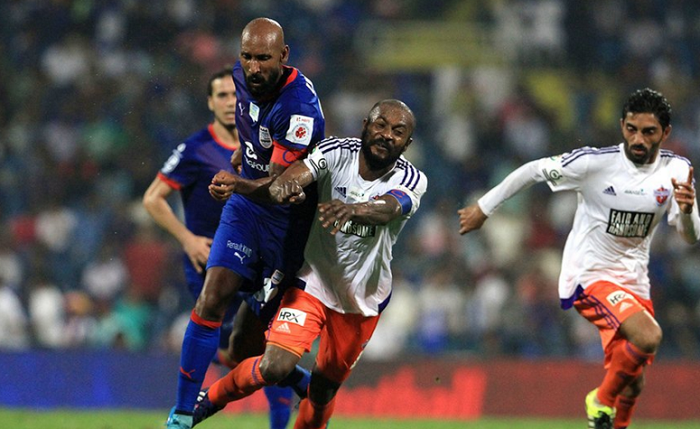 Neither side was able to take advantage of the chances that came their way in the generally slow-paced game.

The draw took Pune’s points tally to 15, the same as FC Goa who have played one match less as compared to the former’s ten and the goal difference is an identical plus 1. Pune have lost one game more than Goa and retained their second spot.

The deadlock kept Mumbai in sixth spot with 12 points from 9 games.

The first half in the second leg Maharashtra Derby saw a battle for the midfield for the major portion though Mumbai attacked with gusto in the first ten minutes without much success.

Seeking a win to propel themselves into the second spot on the table, Mumbai adopted a 4-3-3 format with marquee player-cum-manager Nicolas Anelka taking the field from the beginning and Sunil Chhetri warming the substitutes’ bench after playing for India against Guam in the World Cup qualifier last evening at Bengaluru.

Along with fellow-strikers Frederic Piquionne and Subash Singh — who was back after a one-match suspension following the red card he picked up against Atletico de Kolkata here Anelka kept the rival defense on the toes with good promptings from midfielders Selim Benachour and Christian Bustos.

Pune, also seeking a win after three games to shoot to the top, slowly came into their own and their marquee signing Adrian Mutu, playing the role of the lone striker, and attacking medio Tancay Sanli made forays into the rival half, but without much cohesion.

The visitors too could not start with Eugeneson Lyngdoh after his appearance in yesterday’s World Cup qualifier. Like Mumbai did for Chhetri, he too was kept in the substitutes’ bench by Pune. .