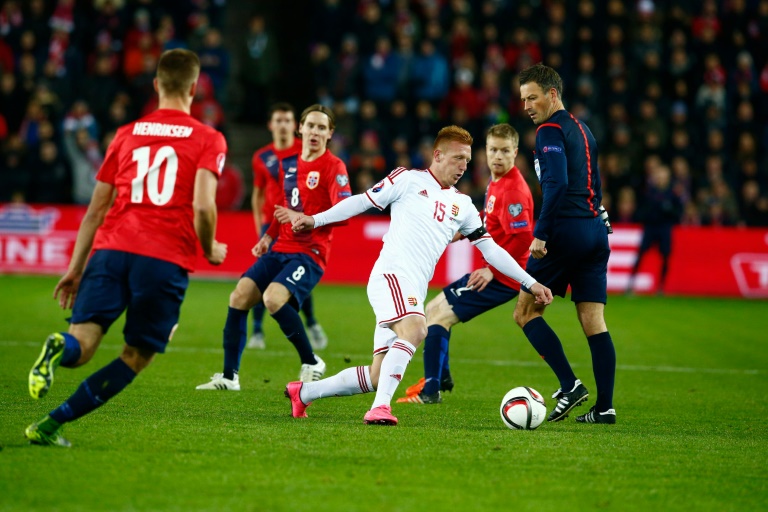 Grief-stricken Hungary edged closer to their first international tournament in almost 30 years when they defeated Norway 1-0 in the opening leg of their Euro 2016 play-off on Friday.

On the day that Hungarian international goalkeeper Marton Fulop lost his battle with cancer at the age of 32, his teammates honoured his memory with a crucial victory ahead of Sunday’s return in Budapest.

Midfielder Laszlo Kleinheisler marked his international debut with the game’s only goal in the first half before Hungary, whose last major event was the 1986 World Cup in Mexico, soaked up constant pressure from the home side to preserve their advantage.

Norway had the better exchanges in the first half and should have been ahead as early as the third minute.

Markus Henriksen sped down the left before cutting the ball back to Per Skjelbred who had been left in space inside the penalty area.

But his close-range drive was spectacularly parried away one-handed by 39-year-old goalkeeper Gabor Kiraly who was making his 100th international appearance.

Hungary, wearing black armbands in memory of the 24-capped Fulop, made the most of their escape by snatching the lead after 26 minutes.

Kleinheisler played a smart one-two with Akos Elek and the 21-year-old Videoton midfielder buried his chance with a left-footed shot on the turn.

Norway continued to press after the break.

Omar Elabdellaoui looked to have been fouled in the area but appeals for a penalty were waved away by English referee Mark Clattenburg.

Alexander Soderlund then fired over and Jo Inge Berget had an attempt blocked.

Marcus Pedersen also missed the target with a header before substitute Pal Helland saw a header bounce off the crossbar in the 88th minute.

In the other play-off first leg matches, Bosnia-Herzegovina host the Republic of Ireland on Friday while, on Saturday, Ukraine face Slovenia while Sweden tackle Denmark.