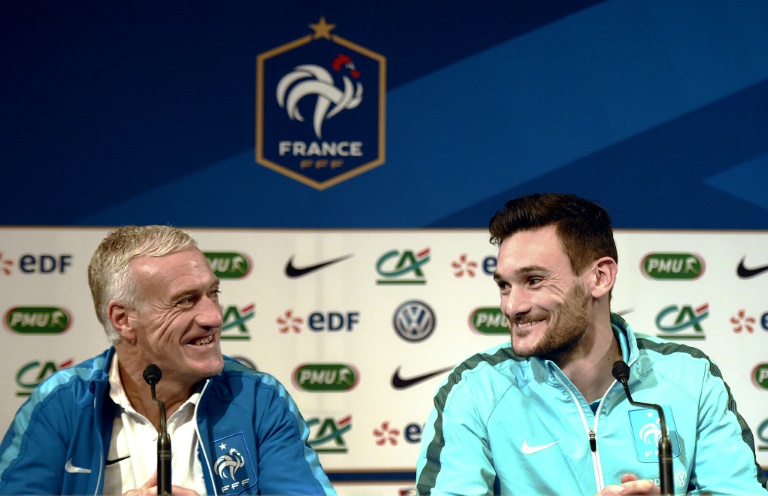 France captain Hugo Lloris gave his support to Karim Benzema and Mathieu Valbuena on Thursday but urged others to seize the chance to impress in their absence.

“Honestly we are all focused on these two big matches coming up. Things have been going very well and everyone is working to be ready,” said Tottenham Hotspur goalkeeper Lloris when asked about the impact on the France squad of the sex tape blackmail affair in which Valbuena and Benzema have been caught up.

“All that is nothing to do with sport. We support Karim and Mathieu but we’ll leave the legal authorities to deal with it all.”

France coach Didier Deschamps left both players out of his squad for Friday’s friendly against world champions Germany at the Stade de France and next Tuesday’s match against England at Wembley.

In their absence, Arsenal’s Olivier Giroud and Manchester United’s Anthony Martial are expected to team up with Antoine Griezmann of Atletico Madrid in attack.

It will be up to them to impress and show that France can cope without two of their most important players — only Lloris has played more games for France since the 2010 World Cup than the Real Madrid striker while Lyon playmaker Valbuena has been a fixture in the national set-up since Deschamps became coach in 2012.

“Whether it’s Mathieu or Karim we are used to seeing them wear the jersey and raise the quality of the team. But we have talented young players who will get their chance to start or come on during the game,” added Lloris.

Euro 2016 hosts France have had their preparations for these two glamour friendly games overshadowed by the affair which has seen Benzema charged with complicity to blackmail and conspiring to commit a criminal act in relation to a sex tape featuring Valbuena.

But Deschamps tried to avoid answering questions on the subject at his pre-match press conference at the Stade de France.

“I am calm, relaxed and concentrating on the games we have coming up. I have nothing particular to say,” said Deschamps.

The France coach added that he was not alarmed by the prospect of having to find a back-up plan in attack as he confirmed that recalled duo Andre-Pierre Gignac and Hatem Ben Arfa will get a run out in the coming matches.

“I don’t feel any sense of urgency. I have selected 23 players and they will provide me with some answers in terms of the future,” added Deschamps.

“We are playing Germany and England and with all the respect I have for the teams we played most recently this is not the same.”

Having qualified automatically for Euro 2016 as hosts, France have not played a competitive game since losing 1-0 to Germany in the 2014 World Cup quarter-final in Brazil.

They have won all four friendly matches played this season, including defeating Armenia and Denmark last month.

Germany, meanwhile, are treating the occasion as a chance to carry out some reconnaissance before they return to France for the European Championship.

Their coach Joachim Loew saw his side stumble at times during qualifying, losing in Poland and Ireland, but he will send out his strongest available team at kick-off on Friday.

“We are pleased to measure up to France who have enormous quality. I would say they are among the favourites to win the (Euro) title,” Loew told journalists near Paris.

“They’ve not had any qualifiers so tomorrow (Friday) will be a big test for them. France will be looking to judge themselves and see where they stand, but they have impressed me a lot recently.”