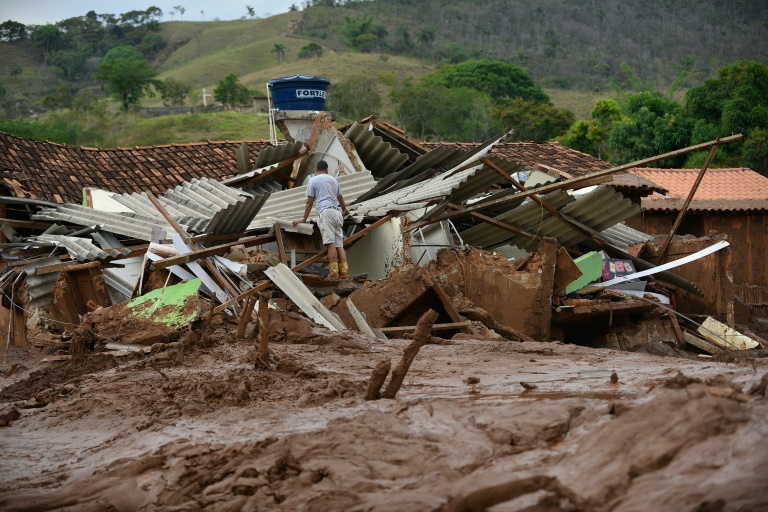 Mining giants Vale and BHP Billiton will be held accountable for a deadly dam rupture at an iron ore mine in Brazil and face immediate fines of about $66 million, President Dilma Rousseff said Thursday.

Two dams at a waste collection pond at the Samarco iron ore mine in the country’s southeast broke on November 5, spewing a wall of mud and water, flattening most of the village of Bento Rodrigues, and polluting the local river.

Eight people were killed and 19 remain missing, with more than 600 left homeless.

“We are committed in the first place to blame those who are responsible. Who is responsible? A private business, Samarco, a big business that has Vale and BHP Billiton as partners,” Rousseff said.

The president said “several laws… were actually not followed. That is why we have imposed a preliminary fine.”

She said Samarco faced initial sanctions of 250 million reais ($66.4 million) for damage to the environment and water supplies and other impacts of the disaster. The mining companies may also be confronted with numerous other categories of fines and demands for compensation, she stressed.

The mine is owned by Australia-based BHP Billiton, the world’s number one mining company, and Brazil’s Vale, the leading iron ore miner.

The disaster — followed by worries over the safety of a third dam — has left the mining giants facing huge legal fallout. The preliminary fines announced by Rousseff were more than double a figure reported earlier Thursday by Brazilian media.

On Tuesday, authorities ordered Samarco to collect and preserve evidence related to the dam failures, making it easier for victims to be compensated. The company will face a daily fine of about $13,000 if it fails to comply.

Shares in both companies have fallen sharply as investors contemplate a clean-up bill that Deutsche Bank estimates could cost more than $1 billion.

Rousseff earlier flew over the scene by helicopter after mounting criticism over her absence a week after the tragedy.

Her office released pictures of Rousseff, who has rock-bottom popularity ratings and faces impeachment threats in Congress, peering from the aircraft.

Earlier, the mayor of nearby Mariana, Duarte Goncalves Junior, pleaded for Rousseff to enter the site on the ground.

“She would see a reality that only someone who is here can understand,” he told Estado de Minas newspaper.

But at her press conference in Governador Valadares, near the area of the accident, Rousseff said BHP and Vale would be made to pay.

In addition to the preliminary fines, which target environmental degradation, Rousseff said the mining giants could face widespread demands for legal damages.

“These fines are preliminary. Various other types of fines could be considered. Beyond that, there are damages both at a federal and state level — the state of Minas Gerais and the state of Espirito Santo,” she said.

Municipalities, communities and individuals could also lodge demands, she added.

Andrew Mackenzie, CEO of BHP Billiton, and Murilo Ferreira, CEO of Vale, made their own visit Wednesday, following growing criticism in the Brazilian media, particularly regarding Ferreira’s low profile since the accident.

The two CEOs said in their statement that they were helping Samarco create an emergency fund for reconstruction and for victims, adding: “It is our intention to work with the authorities to get this fund functioning as soon as practicable.”

BHP and Vale have also provided experts in health, security and the environment, they said.

Minas Gerais officials ordered Samarco to halt operations, and the company has put 85 percent of its employees in both Minas Gerais and neighboring Espirito Santo on paid leave.