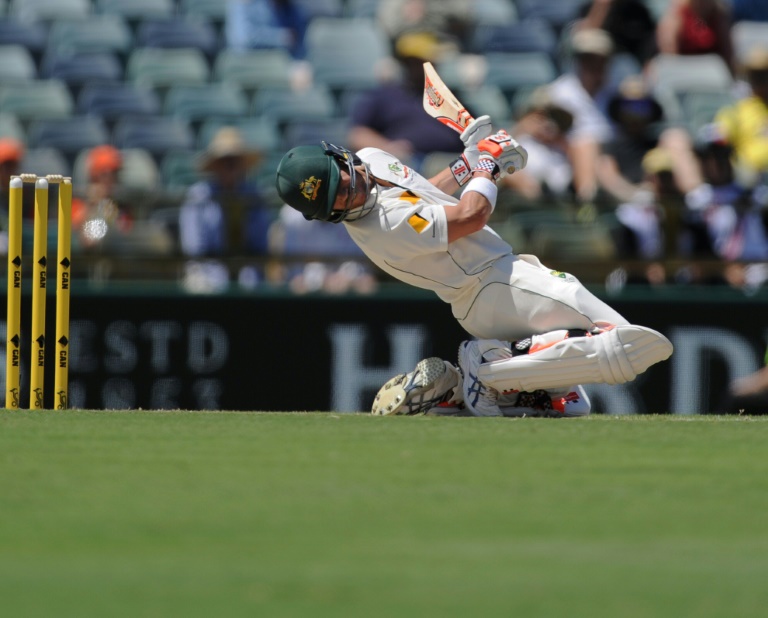 Opener David Warner continued his love affair with New Zealand’s bowling and the WACA Ground by striking another quick century as Australia took charge on the opening day of the second Test in Perth on Friday.

After winning the toss and electing to bat, Warner’s third century in as many innings saw the home side reach 243 for one at tea against the luckless Kiwis.

Already down 1-0 in the three-Test series after being thumped by 208 runs at the Gabba, the Kiwi bowlers were again on the wrong end of the decision review system with the unbeaten Warner cashing in to notch his 15th Test century in 45 matches.

After narrowly surviving a decision review on 78, he reached triple figures with his 12th boundary, having faced 118 balls.

It was also his fourth successive century against New Zealand, making him just the fifth batsman in history to score four hundreds in a row against the same opponent.

The others in the select group are South Africa’s Alan Melville and Hashim Amla, West Indian Everton Weeks and Pakistanâ€™s Shoaib Mohammad.

Warner and fellow opener Joe Burns put on 101 for the first wicket — their third century opening stand in as many innings together.

The feat emulates the great Australian partnership of Matthew Hayden and Justin Langer, who passed centuries in their first three outings together in 2001 and went on to become the fourth-highest scoring partnership in Test history.

It also takes Australia to a Test cricket world record of five successive century opening partnerships, including Warner and Chris Rogers’ last two innings together in this year’s Ashes.

Burns made 40 before chopping a ball on from the bowling of recalled seamer Matt Henry (1-51).

The Kiwis wasted an early decision review on an lbw appeal when a replay showed a clear inside edge from Burns from the bowling of Tim Southee.

Their second review was much more marginal, with Warner given not out lbw and the replay showing fractionally less than half the ball was hitting the bails, leaving the decision as umpireâ€™s call and the visitors without any more reviews.

Khawaja was then given not out caught behind from the bowling of spinner Mark Craig for 38, with replays showing he clearly edged it to add to Kiwi frustration.

Without addition to his score, Khawaja survived another close appeal for lbw by the unlucky Southee.

Khawaja was also dropped on the boundary on 62 just before tea, with the ball flying for six.