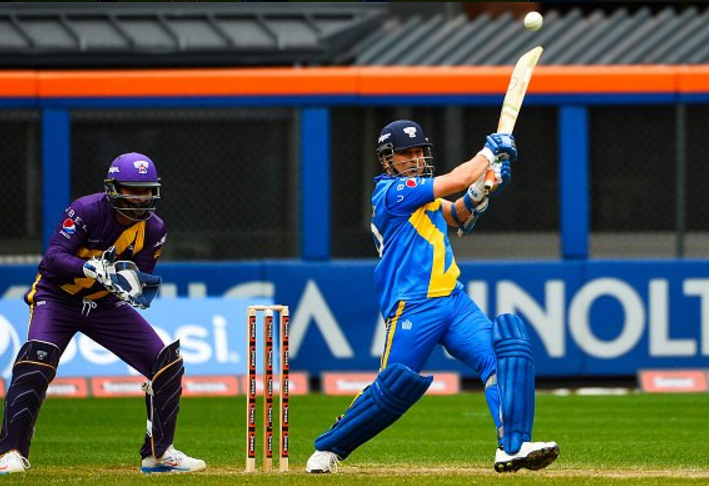 Tendulkar’s decision to put the opposition in to bat backfired as game’s heavyweights Kumar Sangakkara (70 off 30), Jacques Kallis (45 off 23) and Ricky Ponting (41 off 16) tore apart the equally celebrated Warriors’ bowling attack to smash 262 for five in 20 overs.

The ‘legends’ now travel to Los Angeles for the final game of the series on Saturday. The opening match, won by Warne’s men convincingly, was played in New York on November 7.

Though the match’s outcome was not that significant considering the games are a mere exhibition, the famed former cricketers from both teams displayed fierce competitive spirit.

The competitive zeal was evident when the dream opening pair of Tendulkar and Sehwag walked into the middle. What made the contest more mouthwatering was Wasim Akram opening the bowling for Warriors and swinging the ball in from the word go.

However, Sehwag still found a way to break free by flicking the last bowl of the over way beyond the square leg fence.

The recently-retired Sehwag looked in ominous touch, as it was the case in New York, hitting his second six over cover in the following over bowled by Ajit Agarkar.

And amusingly, he was belting it out of the park while crooning an old Hindi song. He played a rare dot ball after smashing Agarkar before playing on to his stumps.

It was now Tendulkar’s turn to use the long handle. The master blaster hammered three fours and couple of sixes before his old foe Saqlain Mushtaq found his stumps with a fast off spinner.

Ganguly, playing his first game of the series, was expectedly rusty to start with but managed a four and a big hit in his run a ball innings.