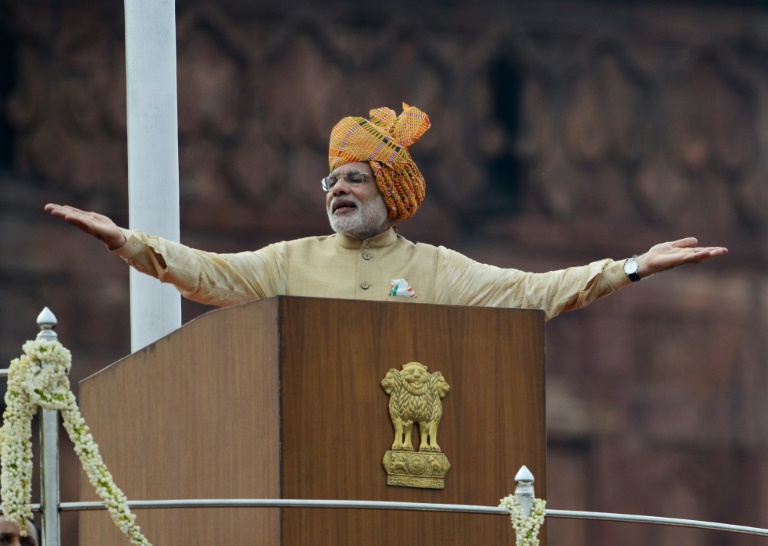 The trip will be the first time an Indian prime minister visits Britain in nearly 10 years and is expected to yield billions of dollars (euros) worth of deals, including India buying more BAE Systems Hawk trainer jets for its armed forces.

The red carpet reception from Prime Minister David Cameron’s government will be a stark reversal of fortunes for Modi, who had effectively been banned from Britain until three years ago over anti-Muslim riots which killed over 1,000 people in 2002, when he was chief minister of Gujarat.

As well as having lunch with the queen at Buckingham Palace on Friday, Modi, who became India’s prime minister with a landslide victory in 2014, will hold talks with Cameron at Downing Street Thursday and his country residence, Chequers.

He will become the first Indian prime minister to address both Houses of Parliament.

The 65-year-old will also appear before around 60,000 of Britain’s 1.5 million-strong Indian diaspora at Wembley Stadium, alongside a free concert and a huge Diwali fireworks display.

“This isn’t just a historic visit. It’s a historic opportunity,” Cameron said ahead of the visit. “It’s an opportunity for two countries, tied by history, people and values, to work together to overcome the biggest challenges of our age.”

India is the world’s ninth-largest economy and, at 7.4 percent, has the fastest growth rate in the G20.

Former colonial power Britain is the fifth-largest world economy. The government is pushing hard to increase overseas trade as it tries to shrink its large deficit in the wake of the 2008 financial crisis.

Cameron promised in 2010 to double Britain’s trade with India by this year. He has visited the country three times, but the trade figure has barely increased.

Gareth Price of London-based foreign affairs think-tank Chatham House said Britain was lower down India’s pecking order than other nations such as Japan or Germany.

“A lot of countries are wooing India with deeper pockets and without the historic baggage,” he told AFP.

Price added that India’s “number one” ask from Britain was usually more visas for Indian nationals. But he stressed this was “problematic” for Cameron, who has been struggling to reduce immigration since taking power five years ago.

Downing Street said the visit would include announcements on “masala bonds” — rupee-denominated bonds which would allow Indian companies to issue debt in London.

Modi’s government Tuesday announced plans to liberalise its foreign direct investment (FDI) regime ahead of the visit in areas including defence, banking and construction. Britain is the third-largest source of FDI in India.

That move is seen as a bid by Modi to counter accusations that his reform drive is stalling, highlighted by his Bharatiya Janata Party’s (BJP) bruising defeat Sunday in elections in the state of Bihar.

“The broad ‘script’ of the trip is likely to be in line with the established pattern, presenting the Indian government as committed to reforms,” it said in a note.

“To some extent, the improvement in India’s position in the World Bank’s ease of doing business ranking — to 130 from 134 last year — supports this.

“However, this is still a far cry from a position in the top 50 that Modi would like India to reach.”

Modi, a Hindu nationalist, is likely to face a string of protests during his visit.

A group calling itself “Modi Not Welcome” is organising a demonstration outside Downing Street during talks with Cameron, accusing Modi of creating an “authoritarian culture” in India.

Some 46 MPs, including the leader of the opposition Labour party Jeremy Corbyn, have signed a parliamentary motion urging Cameron to raise human rights issues with the Indian government.

Cameron’s spokeswoman said that “nothing is off the table” in the talks but stressed that a “strong and close relationship” with India was important.