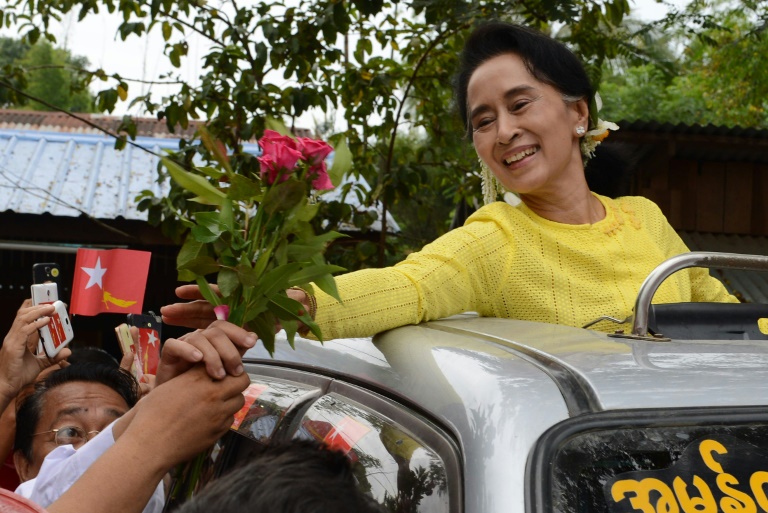 Myanmar pro-democracy leader Aung San Suu Kyi was congratulated by US President Barack Obama as her party stood on the brink of a crushing election win Thursday, with the military pledging a smooth transition of power.

The country has been dominated by the military for half a century through direct junta rule and — since 2011 — by a quasi-civilian government run by its allies.

But the balance of power is almost certain to shift to Suu Kyi’s National League for Democracy (NLD) following the most competitive election in generations.

It has captured more than 80 percent of seats declared so far from Sunday’s election — a dramatic development in the party’s long democracy struggle and a testament to the huge personal popularity of Suu Kyi.

Obama called the Nobel Peace Prize winner, who spent 15 years under house arrest, praising her “tireless efforts and sacrifice over so many years to promote a more inclusive, peaceful and democratic Burma”.

The US leader also spoke to Myanmar President Thein Sein to hail the election and underline the importance for “all parties to respect the official results once announced and to work together with a spirit of unity”, the White House said.

By Thursday evening the NLD was a tantalising two seats short of hitting the magical figure of 329 to claim a majority across both houses of parliament.

It appears set to smash through that marker and rack up a big majority, an outcome that appears to have prodded the conciliatory messages from the military and its political allies.

The army chief repeated his position to military top brass, vowing “co-operation with the new government during the post-election period,” according to a statement on his Facebook page Thursday.

Many NLD supporters remain deeply suspicious of the army and its proxies, who are notorious for political sleight of hand and crackdowns that have left hundreds dead and thousands jailed.

The NLD won a 1990 election by a landslide only for the junta to ignore the result and tighten its grip on power.

A generation later Suu Kyi has called for “national reconciliation”, stressing the need for a peaceful power shift in a nation whose journey towards democracy has been marred by state violence.

In an indication of the political maze ahead, NLD spokesman Nyan Win said the talks are “our first move.”

After decades cloistered from the world by the military and driven into penury, Myanmar caught the eye of the world after it creaked open in 2011 under a semi-civilian government.

Most sanctions were rolled back in lock-step with the greater freedoms.

Obama has thrown his weight behind Myanmar’s reform process and its pro-democracy figurehead Suu Kyi, twice visiting the country in that time.

The American leader has urged the country to tackle religious intolerance and promote full democracy.

White House officials have suggested that further sanctions relief and assistance could be in the pipeline.

While its political proxy, the Union Solidarity and Development Party (USDP), faces annihilation at the polls, the army has its stake in future already guaranteed.

Under a constitution it wrote, 25 percent of all parliamentary seats are reserved for military appointees.

Suu Kyi’s own path to power is also blocked by the 2008 constitution that bars anyone with foreign children — or a foreign husband — from the presidency.

Her sons are British as was her late husband — who died in Britain while she was under house arrest in Myanmar.

‘Mother Suu’, as she is affectionately known, has said a democratic government would not seek to punish historic abuses by the military.

But ahead of elections she struck a defiant note, saying she would take a position “above the president” in the event of an NLD win.

Now her party is poised for power she has indicated she will put forward a proxy for the role, an appointment aided by a large majority.

Shwe Mann, a former general who is also a parliamentary speaker, has been previously tipped as a compromise candidate for the top office.

He was also invited to talks with Suu Kyi despite being sidelined by the USDP and losing his seat in the election.