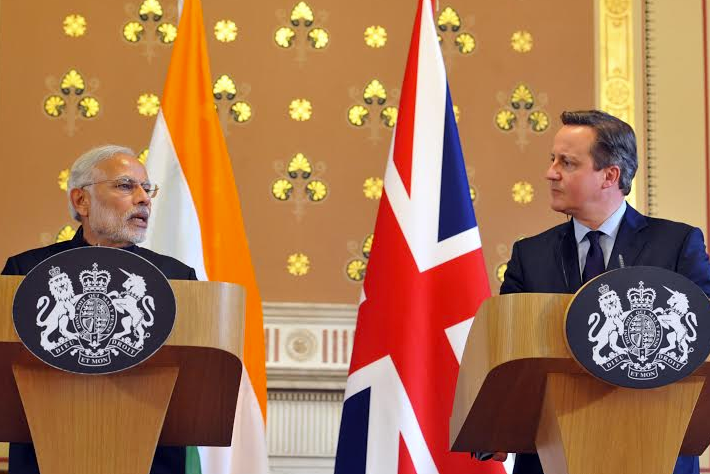 Trade, defence and support for India’s bid for the UN security council seat were also discussed in his bilateral talks with his UK counterpart David Cameron.
Prime Minister Narendra Modi on Thursday said the conclusion of the civil nuclear agreement between India and the UK is a symbol of our mutual trust.
Prime Minister Modi, who was addressing a joint press conference along with his British counterpart David Cameron at the Foreign and Commonwealth Office (FCO) here, said the familiarity of history, the extraordinary people-to-people ties and shared values give the ties between both sides a special character.

“The ties between our people are old, our goals are similar, our partnership is vibrant and our ties are always expanding. We have agreed to intensify our political dialogue and hold regular bilateral summits. The conclusion of the civil nuclear agreement is a symbol of our mutual trust and our resolve to combat climate change,” he added.

“This cooperation will grow. I am also pleased that UK will participate in the International Fleet Review in India in February 2016. UK will also be a strong partner in India’s defence modernisation plans, including our Make in India mission in defence sector,” said Modi.

“We will launch a fast track mechanism for UK investments in India, already a leading investor. The revival of India-UK CEO Forum is welcome. We will also increasingly raise funds in London’s financial market. I am pleased, but also believe it is natural, that we will issue a Railway Rupee Bond in London. This is where the journey of Indian Railways began,” he added.

He further said India is a vibrant democracy and is committed to peace.

Modi faced questions on intolerance in India in recent months and 2002 riots in Gujarat, drawing an assurance from him that intolerance would not accepted in any part of India.

A BBC reporter referred to recent incidents of intolerance and asked why India was becoming an increasingly intolerance place.

Modi replied that India is a land of Buddha and Gandhi and its culture does not accept anything that is against the basic social values.

“India does not accept intolerance even if it is one or two or three incidents. But for a country of 125 crore people whether it is significant or not, it does not matter. For us every incident is serious. We do not tolerate it.

“Law takes strong action and will continue to do so. India is a vibrant democracy which under Constitution provides protection all citizens, their lives and thoughts. We are committed to it,” said the Prime Minister.

Earlier, Prime Minister Narendra Modi held talks with his UK counterpart David Cameron on as he eyes more British investment to India on his maiden visit during which a “package of deliverables” worth billions of pounds in defence and energy sectors was expected be signed.

Modi, who flew into the British capital on his much- anticipated three-day visit, was accorded a guard of honour by the 48-member F Company Scots guard accompanied by the regimental band of Irish guards.

Cameron came out from his 10 Downing Street to receive Modi before the two leaders headed to the world’s most famous political office for a nearly 90-minute dialogue.

The UK had earlier said there will be a “package of deliverables” announced during Modi’s visit. The commercial and private sector deals rather than government to government deals are said to be worth billions of pounds.

Foreign Secretary Philip Hammond had narrowed down defence and civil nuclear as an area of focus during the visit and also confirmed that the Make in India aspect of the Hawk trainers will be on the cards.

Hammond and Defence Secretary Michael Fallon were among senior British Cabinet ministers present during the guard of honour at the Treasury Drum near 10 Downing Street. On the Indian side, Modi was accompanied by a delegation including Foreign Secretary S Jaishankar and Indian High Commissioner to the UK Ranjan Mathai.

Ahead of his departure, he had tweeted: “Leaving for UK.

I am hopeful this visit will strengthen economic ties between India and UK & bring more investment to India. #makeinindia.”

A brief stop to pay tributes at the Mahatma Gandhi statue in Parliament Square will be followed by speeches at the Houses of Parliament and then at the Guildhall in the financial hub of London.

His talks with Cameron will carry on at the British Prime Minister’s country residence of Chequers in Buckinghamshire, where he is being hosted overnight.

Ahead of Modi’s visit, Jaishankar had said that both sides are likely to sign a number of agreements, including on energy and climate change.

He had said that boosting economic ties will be a major focus area, besides enhancing ties in defence and clean energy sector.