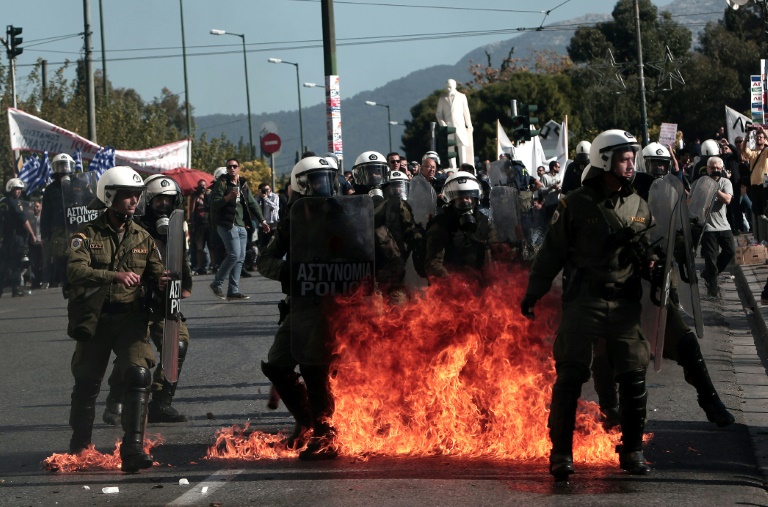 Over 20,000 people demonstrated against fresh spending cuts in Athens Thursday, with a brief flare-up of violence marking the first general strike against the leftist government of Alexis Tsipras who came to power on an anti-austerity ticket.

As the demonstration reached parliament, scores of hooded youths began vandalising shops, bus stops and traffic lights, according to an AFP reporter at the scene.

During the unrest, youths set garbage bins alight and torched a car with Molotov cocktails.

Makeshift firebombs were also lobbed at the finance ministry — briefly setting a balcony on fire — and the Bank of Greece.

The violence began when around 150 youths attacked police stationed in front of a row of luxury hotels on the central Syntagma square, then quickly retreated.

“I am protesting against the government because they are making fools of us. I am a pensioner and I have no idea what my pension will be,” said 63-year-old Maria Athanassiadou.

In a reference to Tsipras’ broken promises to scrap austerity measures, some protesters carried balloons that read ‘the words of Alexis’.

“We were better off with the conservatives,” said Angeliki Tambouri, a woman working in garbage collection.

“They are slashing our benefits and wages. What else are we supposed to do (but protest)?” she said.

Police put the turnout at around 20,000 but media reports estimated the numbers at around 30,000.

“We want to stop the cuts, delete the debt, we want money for health,” said Zanetta Lysikatou, a surgeon at a leading Athens hospital for children.

Unions launched the 24-hour walkout against tax hikes and an upcoming pensions overhaul, shutting down public services, boat and train transport and forcing the cancellation of dozens of domestic flights.

In July, Greece accepted a three-year, 86-billion-euro ($93-billion) EU bailout that saved it from crashing out of the eurozone, but it came with strict conditions, with Athens poised to push through a raft of unpopular reforms.

Hospitals were running on emergency staffing and museums and archaeological sites were closed. Journalists were also participating in the 24-hour walkout.

“Together we can impose radical changes in the economy and society for the good of our people,” he said.

Over a million Greeks are unemployed according to official figures, which unions say fail to show the scope of the problem.

On Thursday, official statistics showed the jobless rate had fallen in August but still stood at 24.6 percent of the registered workforce.

Tsipras’ decision to accept a bailout conditioned on fresh tax hikes and pay cuts caused a split in his ruling Syriza party over the summer.

While the government has pledged to apply the cuts, Syriza this week called for a “mass participation” in Thursday’s strike, saying it was determined to continue the struggle against “anti-social, extreme neoliberal policies”.

The paradox was quickly picked up on by social media.

“I’m confused. Are we marching with Alexis to topple Tsipras, or with Tsipras to topple Alexis?” said one user.

Tsipras has called the bailout agreement a “painful compromise” and a “tactical retreat” that enabled the country to avoid bankruptcy and stay in the euro.

Thursday’s strike came as senior representatives of the European Commission, the European Central Bank, the IMF and the European stability fund were holding a review of the reforms pledged by Athens.

Greece has adopted a number of unpopular reforms but is has been resisting pressure to facilitate home loan foreclosures, saying it needs to maintain a safety net for more vulnerable households.

There is also a rift over Greece’s mechanism for dealing with bad loans — an important factor in shoring up the country’s beleaguered banks.

A senior minister said late on Wednesday that an agreement could nonetheless be clinched by the end of this week.

“I believe we will have closed all the issues by Saturday,” Economy Minister George Stathakis said.