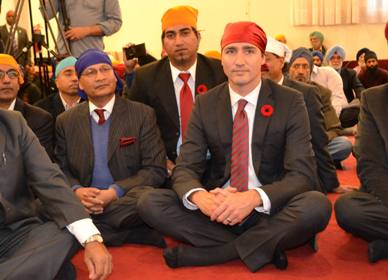 His love for Indian rituals and celebrations is well known. Taking his love a step further, in a first of its kind event, Canadian Prime Minister Justin Trudeau visited the Hindu Temple and Gurdwara Saheb, in Ottawa to celebrate Diwali with the Indo-Canadian community. And the community turned out in huge numbers to greet him.

“Member of Parliament from Ottawa Chandra Arya, welcomed PM Trudeau on arrival at the temple along with the temple President. High Commissioner Vishnu Prakash congratulated the Prime Minister on his election, observing that he was honouring 1.2 billion Indians and the large Indo-Canadian community by celebrating Diwali with them,” the High Commission of India in Ottawa said in a statement.

The Prime Minister participated in the Puja at the temple and the Gurbani recital at the Gurdwara, before addressing the congregation at both places.

He said that Diwali had evolved into a ‘global’ celebration and was not just an Indian festival.

“Today, I join Canada’s Hindu, Sikh, Jain and Buddhist communities in recognizing the occasion of Diwali and Bandi Chhor Divas. Tonight, families and friends take this occasion to reflect on the triumph of good over evil,” Trudeau said in a written statement.

The Prime Minister added that Diwali highlights the values of respect and inclusion, and the commitment to freedom and equality shared between the nations and that it is a reminder that Canada is a nation made stronger not in spite of their ‘differences’, but because of them.

“On behalf of the Government of Canada, Sophie (his wife) and I wish a very happy Diwali and Bandi Chhor Divas to all those observing these holidays with their family and loved ones,” Trudeau said.

The Canadian Prime Minister happily mingled with members of the community, obliging scores of them with selfies and pictures and spent over forty-five minutes each at both venues.