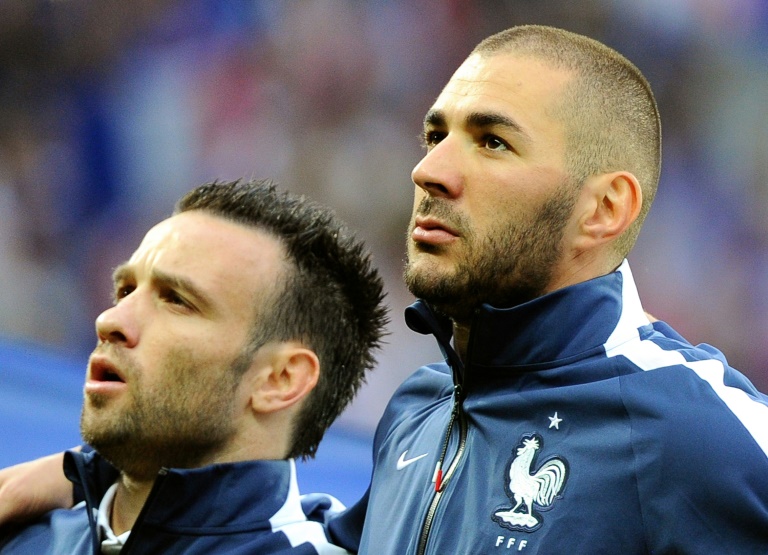 The sex tape blackmail affair involving Mathieu Valbuena, which has led to star striker Karim Benzema being charged, completely overshadows the build-up to France’s friendly with Germany on Friday.

The sides meet at the Stade de France just under a month before the final draw takes place in Paris for Euro 2016, a tournament in which both nations will be among the favourites.

But Les Bleus’ prospects are already being called into question, and their current good form rendered practically irrelevant, by recent events.

Benzema was last week charged with complicity to blackmail and conspiring to commit a criminal act, charges that carry a prison sentence of at least five years, in relation to a sex tape featuring Valbuena.

He was also banned from meeting Valbuena, and potentially incriminating transcripts of telephone conversations involving the Real Madrid striker have been widely reported in French media.

France coach Didier Deschamps has overseen four successive friendly wins this season and must try to keep the focus on the football for the games against the Germans and England at Wembley next Tuesday.

Both Benzema and Valbuena were left out of his squad, with Deschamps saying the latter’s absence was due to his “psychological condition” while Benzema’s was fitness related.

In the meantime, he will hope others can stake a claim for a place in the side.

Benzema is France’s outstanding centre-forward while little Lyon playmaker Valbuena recently won his 50th cap but, as his squad got together this week, Deschamps said: “I have selected 23 players. I have confidence in them.

“The most important thing is the group and their strength as a collective. On the German side there are also players missing and important ones too.

“Everyone has to make themselves indispensable but nobody is irreplaceable.”

Among those looking to impress will be Hatem Ben Arfa, who returns to the fold after an outstanding start to this season at Nice.

The former Newcastle United forward won the last of his 13 caps at Euro 2012 and he is having to get used to the surroundings at France’s Clairefontaine base near Paris once again.

“Yesterday I wanted to go to the toilets but I got lost,” he said this week.

“A lot of things can happen between now and then but it is an objective to play a Euro at home. It would be nuts.”

Bayern Munich’s Kingsley Coman, 19, may make his debut and Andre-Pierre Gignac has been recalled to the surprise of many after leaving Marseille in the summer for Mexican club Tigres of Monterrey.

“It is proof that it wasn’t such a bad choice to exile myself. Some people thought I was going there to live a golden retirement, for the money. My performances show that I wasn’t there on holiday, but to work,” said Gignac.

The game will be the first meeting of the nations since a 1-0 Germany win in the World Cup quarter-final in the heat of the Maracana in July last year on their way to winning the trophy.

German football has its own off-field issues just now with national federation chief Wolfgang Niersbach stepping down amid claims of vote-buying in order to secure the hosting of the 2006 World Cup.

But at least that scandal should not directly impact on coach Joachim Loew and a squad deprived of the injured Mario Goetze and Marco Reus.

Real Madrid’s Toni Kroos and Arsenal’s Mesut Ozil have both been left out but Loew will select the strongest team available to him for Germany’s first match at the Stade de France since a 2-1 friendly win in February 2013.

That means Bayern’s Manuel Neuer should start in goal, while striker Mario Gomez could start in attack after earning a recall.

“It can’t hurt to have a player like me when things aren’t going our way,” said Gomez, who is currently on loan at Besiktas in Turkey from Fiorentina and hopes to remain in contention when the Germans return to France for the European Championship next year.

“To still be there next year, I will have to put in a few good months.”