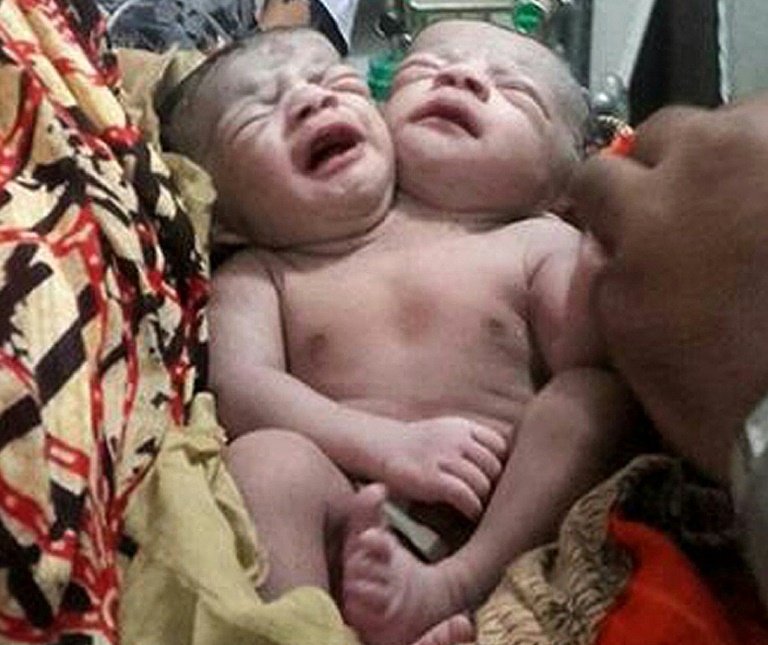 Doctors at a Bangladesh hospital were treating a baby girl born with two heads on Thursday, medical officials and the newborn’s father said.

The baby was born late Wednesday and is now being treated for breathing difficulties after being shifted to the intensive care unit of the country’s largest hospital in Dhaka.

“When I saw my baby, I was awestruck. She has two fully developed heads. She is eating with two mouths and breathing with two noses,” her father, Jamal Mia, said.

“Still, I thank Allah that she and the mother are now okay,” Mia told AFP.

Abu Kawsar, owner of the Standard Hospital of Total Healthcare where the baby was born by Cesarean section, said initial tests showed she only has one set of vital organs.

“Except for having two heads, the newborn has the rest of her organs and limbs like a normal newborn,” Kawsar told AFP.

Thousands of people thronged the hospital in Brahmanbaria, where she was born, some 120 kilometres (75 miles) east of Dhaka, after news spread of the “miracle newborn”.

“The entire town poured into the clinic. There were thousands of people with some of them coming from the nearby villages,” he said.

“It’s good that the baby has been shifted to Dhaka. Otherwise, it would have been difficult for us to control the crowd.”

Her father, Mia, a poor farm labourer, said he was concerned about how he would manage to care for the baby if extra expenses were needed.

“I feel sad for her. She has been born to a poor man. I don’t have money to even properly treat her mother,” he said.

A baby was also born in Bangladesh with two heads in 2008 but later died.

T20 World Cup To Kick Off From Tomorrow: Here’s Everything You...