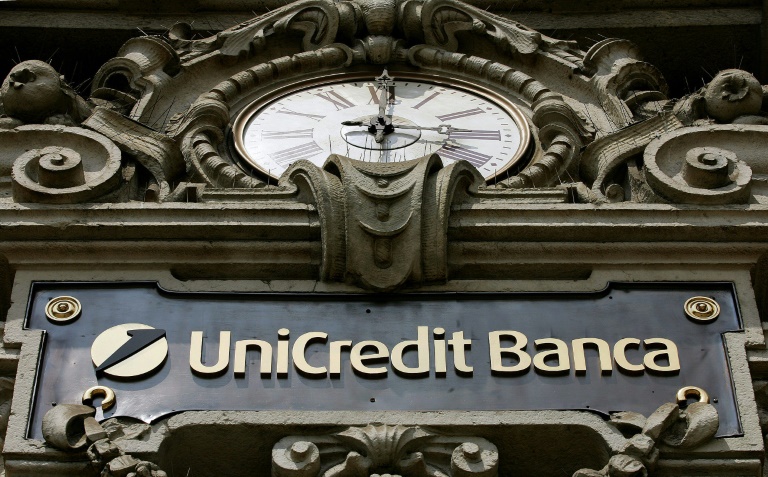 Italy’s top bank UniCredit announced plans Wednesday to shed over 18,000 jobs in an effort to stay profitable as low interest rates and the weak economy weigh on earnings.

A third of the 18,200 jobs are to go as UniCredit sells off a bank in Ukraine and a joint venture between its Pioneer unit and Santander.

The rest is to be achieved through cuts in Italy, Germany and Austria, leaving the bank with 111,000 employees in 2018.

The bank hopes to achieve a net profit of 5.3 billion euros by then — a figure revised down from its earlier estimate of 6.6 billion euros.

He said the bank would focus on “significant cost containment measures and further discontinuity actions” as well as “exiting or restructuring poorly performing businesses”.

The cuts involve further reducing the number of bank branches in Italy, Germany and Austria, closing 800 by 2018.

The bank anticipates exiting or restructuring its Austrian retail activities and Italian leasing business by the end of 2016.

– ‘Investments for the future’ –

There would, however, be “considerable investments for the future”, including 1.2 billion euros in digital developments.

The bank expects over 90 percent of transactions to be carried out remotely by 2018, affecting 1,500 branches.

The plan was well received by the Milan stock market, where UniCredit shares were up 1.52 percent in a market up 0.42 percent in afternoon trading.

Italyâ€™s biggest bank by assets returned to profit last year after hemorrhaging 14 billion euros in 2013 as it wrote down assets ahead of “stress tests” carried out by the European Central Bank on the heels of the eurozone financial crisis.

Ratings agency Moody’s said Tuesday it was revising up from “negative” to “stable” its outlook for the Italian banking sector as bad loans which hit the lenders hard are gradually dealt with.

In a bid to bolster the EU’s fragile economy, the ECB has brought its key interest rate down close to zero.

It now stands at 0.05 percent, and while the low rate is good news for spenders, for European savers it often no longer pays to park cash in a savings account and banks lose out on a large chunk of profits.

Milan-based UniCredit is also vulnerable to weakness in the Italian economy, which is struggling to recover from a deep recession.

Inflation accelerated slightly in October while consumer confidence rose from 113.0 in September to 116.9, the highest reading since February 2002, according to the National Statistics Institute (ISTAT).

But the country still carries the second highest debt in the eurozone after Greece, estimated at 133 percent of GDP.