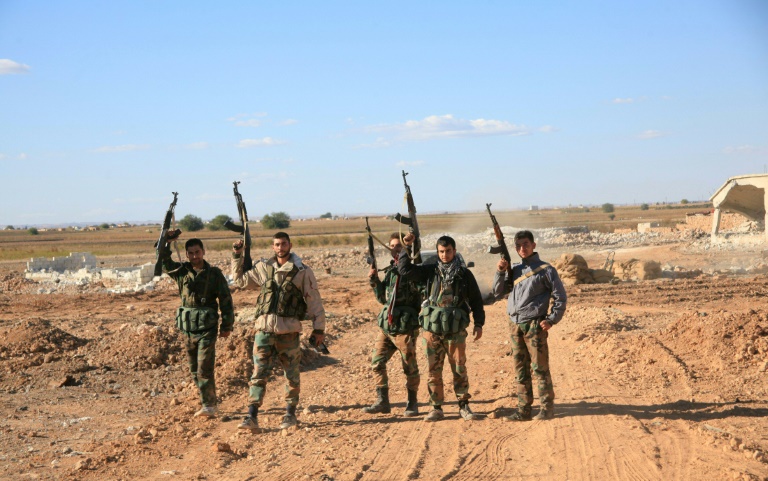 Syria’s army broke a more than year-long jihadist siege of a military air base in the country’s north Tuesday, scoring its first major breakthrough since the beginning of Russia’s air campaign.

But the government advance came as at least 22 people were killed in one of the bloodiest mortar attacks yet on the regime’s coastal bastion of Latakia.

A group of soldiers penetrated IS lines west of the airport and reached government troops inside the base, firing into the air in celebration.

State television also reported the breakthrough and broadcast live from outside the airport, declaring the advance a “victory”.

It said a “large number of IS terrorists” were killed but provided no other details.

IS surrounded Kweyris in spring 2014, tightening a siege that rebel groups had begun in April the year before.

Regime loyalists and IS jihadists remained locked in fierce clashes to the airport’s north, east, and west on Tuesday evening, said Rami Abdel Rahman, head of the Syrian Observatory for Human Rights, a Britain-based monitoring group.

IS militants were still present in other areas around the airport and further east in Aleppo province, he told AFP.

The army’s offensive to break the siege began at the end of September, with support from Russian warplanes, Iranian troops, fighters from Lebanese Shiite militia Hezbollah, and the pro-government National Defence Forces militia, Abdel Rahman said.

If the base is completely secured, it could be used by Russian planes — currently flying out of the Hmeimim base in Latakia province on the Mediterranean coast — to launch strikes, he said.

“In particular, it will help their efforts to retake all of Aleppo city,” which is divided between rebels and regime forces, Abdel Rahman said.

Russia’s air force has been conducting strikes across Syria since September 30 against what it says are “terrorist targets”.

The air campaign has backed Syrian army ground offensives in several provinces, including Aleppo, Hama and Homs in the centre, and Latakia in the west.

But the regime has struggled to advance against opposition forces, often briefly seizing a town before losing control of it again.

By the first week of November, Islamist groups and rebels had rolled back all of the Syrian army’s gains in Hama province.

In Aleppo province, Syrian troops backed by Russian air power have edged into territory controlled by rebels and IS jihadists south and southeast of the provincial capital, but securing Kweyris would mark the first major victory in the area.

The breakthrough came however only hours after one of the deadliest attacks in the conflict in the regime’s seaside stronghold in Latakia.

At least 22 people were killed and 62 others wounded in mortar fire on eastern neighbourhoods of Latakia city, Syrian state television reported.

Latakia lies in the heartland of the minority Alawite sect to which Syria’s ruling clan belongs and has been largely spared attacks during four and a half years of civil war.

According to a Syrian security source, the attack took place near Latakia’s Tishreen University, where many students were gathered.

Abir Selman, a 24-year old literature student at the university, said she was waiting for the bus when the mortars struck.

“I saw blood everywhere and people running in every direction,” she told AFP. “I passed by a corpse that had nothing left except for its legs.”

One person was killed and five wounded meanwhile in a mortar attack on residential areas of Damascus, state television said.

The Observatory said four people, including a child, were also killed in government rocket fire on the flashpoint town of Douma, east of Damascus.

Douma lies in the opposition bastion of Eastern Ghouta, which is regularly bombarded by regime forces.

As well as the Russian strikes, IS is being targeted by a US-led coalition including France, which said Tuesday it had stepped up its bombing campaign against IS’s oil infrastructure with new raids in eastern Syria.

More than 250,000 people have been killed in Syria’s conflict, which began in March 2011 with anti-government protests but spiralled into a civil war after a crackdown by government forces.