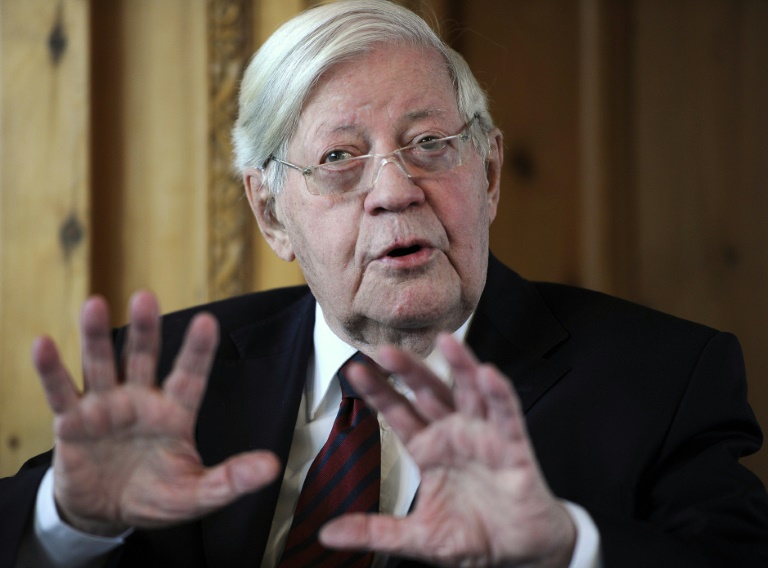 Former West German chancellor Helmut Schmidt, who died Tuesday aged 96, was an inveterate European, master of realpolitik, and straight-talking elder statesman who commanded respect and headlines into his twilight years.

Schmidt led then-West Germany from 1974 to 1982 as it rose to become a global economic powerhouse.

A centrist from the Social Democratic Party (SPD), Schmidt steered the country through a bloody wave of terror by far-left radicals from the Red Army Faction (RAF), preached free-market economics to his party and embodied cool-headed pragmatic politics in a Europe riven by the Iron Curtain.

Leading tributes to the man she described as “a political institution of our country”, German Chancellor Angela Merkel said Schmidt was “an authority whose advice and judgment meant something to me”.

President Joachim Gauck said Germany had lost “a great statesman, a person who was so much for us: a politician and publicist, a man of action and an admonisher, but above all, a democrat, a man who knows that freedom also means responsibility and who took on this responsibility.”

He was a popular guest on television chat shows, always granted special dispensation to flout a smoking ban while holding forth with the laconic brand of wit prized in his native port city of Hamburg.

From early on in his political career, Schmidt was capable of sarcasm and impatience, and his delivery of often unconventional views kept him in the public eye decades after retiring.

German media recently grouped him among “Russia apologists” after he expressed understanding for President Vladimir Putin’s actions in Ukraine.

Unlike his SPD predecessor Willy Brandt, news weekly Der Spiegel noted in December 2013, Schmidt didn’t opt for grand gestures or seminal speeches to break with Germany’s past. In another contrast to Brandt, who fled abroad to escape arrest by the Nazis, Schmidt served in Hitler’s Wehrmacht.

“He was not loved, but respected,” Der Spiegel said, noting Schmidt’s knack for pearls of wisdom. “No storm in world affairs seemed to affect his calmness.”

Capable of being both amusing and brusque, Schmidt once famously dismissed an interviewer’s question, saying: “Anyone who has visions should see a doctor.”

Born in Hamburg in 1918, Schmidt was the grandson of a docker, and his father, a teacher, was the illegitimate son of a Jewish banker — though the family succeeded in hiding its Jewish roots from the Nazi regime.

Schmidt wanted to become a town planner or architect but World War II forced him to put his ambitions on hold and he eventually fought on the Russian and Western front, and was briefly taken prisoner.

He was elected to the Bundestag in 1953, and made a name for himself with his handling of catastrophic flooding in the early 1960s while a regional Hamburg politician.

He steadily rose through SPD ranks to become defence minister in 1969 and finance and economy minister in 1972, before becoming chancellor two years later.

Once in government Schmidt faced difficult challenges, including conflict in the Middle East and a dramatic hike in oil prices that sparked an economic crisis.

He firmly believed in the Atlantic alliance, although he became exasperated by then-US president Jimmy Carter. He also forged a close partnership with French president Valery Giscard d’Estaing, with whom he helped launch the forerunner to G7 summits of industrialised nations.

In 1977 when Palestinian militants hijacked a Lufthansa plane and demanded the release of jailed leaders of the extreme-left RAF, Schmidt ordered the aircraft be stormed.

In the same year, three high-profile figures including a federal prosecutor were killed in a wave of RAF assassinations, bombings and kidnappings that shook West Germany throughout the decade.

Resistance to Schmidt built up across the party — especially on defence matters — and he was hospitalised with an irregular heartbeat in 1981 and had a pacemaker fitted.

The decision by coalition partner the Free Democrats to switch alliances to the Christian Democrats in 1982 finally brought Schmidt’s downfall through a parliamentary no-confidence vote, and led to conservative Helmut Kohl becoming chancellor.

“Like few others in post-war history, he understood how to surmount crises with courageous intervention of the state,” ex-SPD chancellor Gerhard Schroeder wrote in Der Spiegel.

Schmidt was married to teacher, and fellow chain-smoker, Loki, for 68 years until her death in 2010. They had one daughter.

On his 90th birthday, top-selling daily Bild published 90 of Schmidt’s most quotable bon mots, including his advice to aspiring politicians: “One needs the will. And cigarettes.”