Home Sports Cricket All Stars ready to showcase in Houston 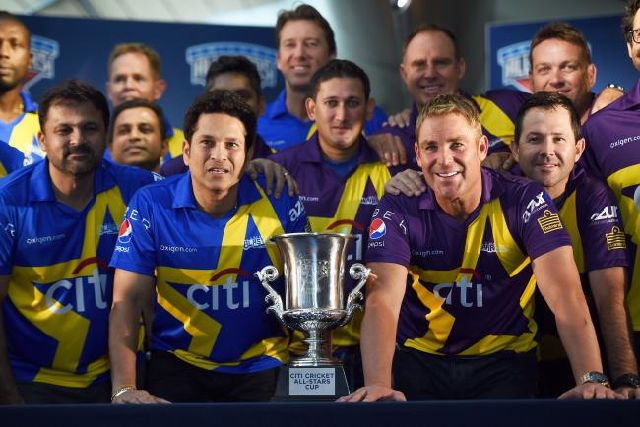 Houston: After a spectacular head to head first game in New York, the Cricket All Stars Spectacle, featuring Sachin’s Blasters and Warne’s Warriors, is set to woo thousands of cricket fans on Wednesday.

After the first T20 witnessed 25000 fans at New York’s Citi Fields, mostly expats, the cricket stars are ready to face each other again at Houston’s baseball ground, Minute Maid Park, on Diwali night.

It will be the first time when cricket will be played in this famed base ball stadium.

Sachin Tendulkar’s Blasters will look to even things after Shane Warne’s side pocketed the opening game.

Warne’s side won the first of the three T20 clashes by six wickets in New York, with Ricky Ponting’s unbeaten 48 being the crucial knock as the Warriors chased down the 141-run target.

The teams have touched down already and players are doing their bit to stir up some excitement among the locals here.

The stars will indulge in small coaching and engaging activities with budding cricket enthusiasts in the region before taking field for the big game.

A Clinic has been organised in the afternoon where the players will coach children from cricket academies. The Clinic will be followed by a 15-minute group Question and Answer session with the players.

Both global icons Warne and Tendulkar are aiming to increase the appetite for cricket in the United States through their All-Stars series, which involves two star-studded teams of former internationals.

The Cricket All Stars official social media handle posted a video of the cricketers making way out of their flight with Mahela Jayawardene doing the filming.

Allan Donald and Warne have already tweeted about the same.

It will be interesting to see which players make the cut in the second fixture. Glenn McGrath and Sourav Ganguly, who didn’t play the first fixture, are likely to take field.

“Bringing this cricket match to Minute Maid Park is a great opportunity for us to once again host a marquee event and for Houston to experience a sport that is increasing in popularity around the world,” said Astros President of Business Operations Reid Ryan.

“These types of events make Minute Maid Park a great fan venue year-round, and are part of our commitment to bringing the best in entertainment and sports to Houston.