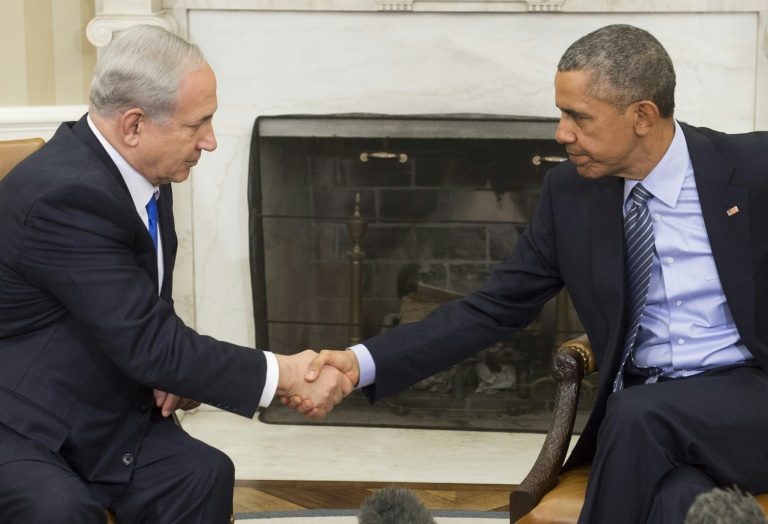 Speaking in the Oval Office, Obama admitted it was “no secret” the two men disagreed on how to deal with Iran’s nuclear program, but both sought to end bitter public rancor and focus on areas of cooperation, including a military deal worth more than $30 billion.

Obama — who leaves office in early 2017 — offered the combative Israeli prime minister a lengthy handshake and hailed the “extraordinary bond” between the two countries.

The designed-for-television display of cordiality signaled a willingness on the part of both men to avoid unnecessary drama in the last 12 months of working together.

Officials told AFP the bumper security deal will include the sale of advanced US weapon systems, perhaps including hi-tech F-35 jets, precision munitions and V-22 Ospreys.

The deal will only come into effect after a current accord expires in 2017.

“We have closer military and intelligence cooperation than any two administrations in history,” Obama said.

Netanyahu reciprocated by trying to bury suggestions — fueled by his own re-election campaign comments — that he does not support the creation of a Palestinian state.

For decades, the prospect of a two-state solution has been the bedrock of peace efforts. Netanyahu had infuriated the White House by suggesting that prospect was dead.

US officials feared such comments would only fuel Palestinians’ sense of skepticism about the political process and the type of violence that has engulfed Jerusalem.

“I remain committed to a vision of peace of two states for two peoples, a demilitarized Palestinian state that recognizes the Jewish state.”

Senior US officials admit that a peace deal will not come during Obama’s final year in office, but they wanted Netanyahu to lay the groundwork for a return to the negotiating table.

Monday’s White House summit was the first meeting between Obama and Netanyahu in over a year.

There was no joint press conference or statements after roughly two hours of meetings.

Netanyahu described the meeting as one of the best he had with the US president.

During his last trip to Washington in March, the Israeli prime minister found the door of the White House slammed firmly shut, with Obama refusing to meet him.

Obama waited days before phoning Netanyahu to congratulate him on his reelection.

The White House had been infuriated by Netanyahu’s decision to appear in Congress at Republicans’ invitation and urge US lawmakers to vote against a deal to curb Iran’s nuclear program.

Obama views the deal as a signature achievement that will close down Tehran’s pathway to getting a bomb.

The Israeli leader publicly and stridently opposed a deal, describing it as a “stunning, historic mistake.”

That stance softened slightly following the meeting, with Netanyahu saying “we have a common interest in preventing Iran violating the deal that was signed.”

Israel could still be a help or hindrance to Obama in keeping the agreement on track, ratcheting up domestic pressure on the White House should Iran stall or falter on implementation.

Some commentators have called for Israel and the United States to set up a formal joint implementation mechanism, a move that would infuriate Tehran.

Obama did not go into specifics, but said that the two countries “don’t have a disagreement on the need to making sure that Iran does not get a nuclear weapon.”