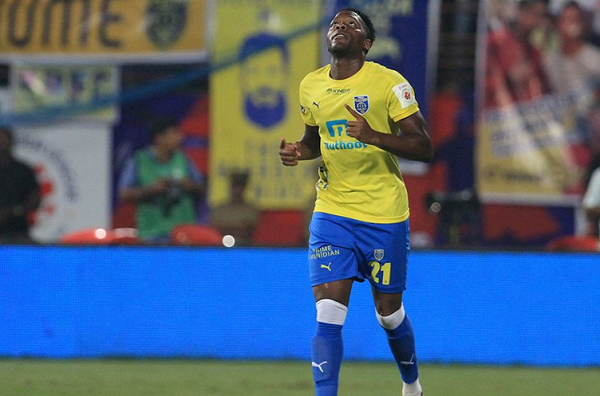 Izumi first found the back of the net in the 84th minute and scored the decisive goal on the 90th minute exactly, helping the defending champions overcome the hosts at the Jawaharlal Nehru Stadium.

Nallapan Mohanraj put the visitors ahead with a 29th minute strike. Antonio German restored parity when he found the target in the 42nd minute. Having conceded the lead again after the breather, German once again helped Kerala Blasters draw level by scoring in the 85th minute.

However, it was not to be Kerala Blasters’ day as Arata sealed the issue with his strike just before the final whistle.

Izumi’s second goal of the night in injury time was the hammer blow as Kolkata kept their chances of making the semi-finals alive with their fourth win in nine matches.

Coming off the bench, if Arata’s first goal was not enough, he again put his team ahead with a calm and composed finish from inside the box. Sameehg Doutie sent in a ball into the six-yard box which Arata gleefully tapped in.

Struggling at the bottom of the table, the defeat has not only broken the hearts of the Blasters fans but also the players, especially German who produced a stellar show only to end up in the losing team.

His two goals could not save his team from losing and it also almost ends their hopes of qualifying for the knockout stage.

The fans were witness to an enthralling game of football.

Atletico de Kolkata started the ball rolling with Mohan scoring the first goal. Kerala Blasters FC pulled things back before half time thanks to a successfully taken penalty by German.

In the second half, both teams fought hard and eventually, Arata got lucky as his attempted cross crept into the back of the net.

German pulled things back once again with a superb left- footed strike. However, all the efforts of the Englishman went in vain as Arata stole the winner in the dying minutes.

In the end, Atletico de Kolkata just edged past their opponents and with three points move to the fourth position in the points table. Kerala Blasters are rooted to the bottom and it will be nothing short of a miracle if they manage to break into the top four from here on.