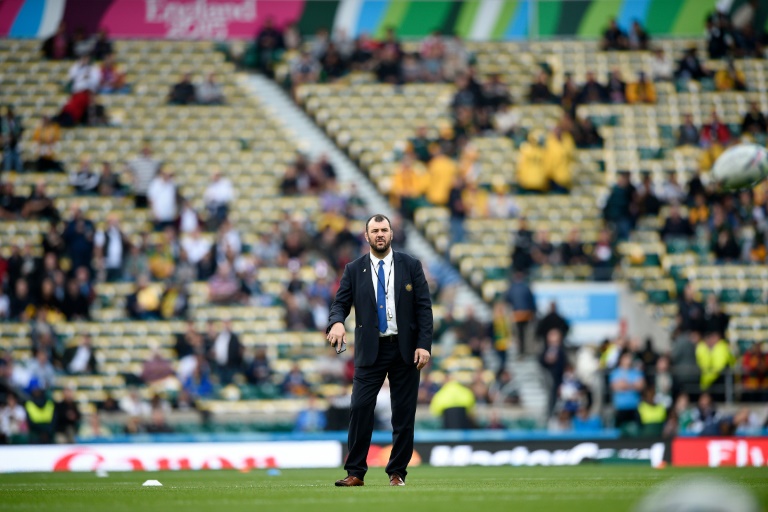 However, a spokesman for the RFU, England’s national governing body, said Monday: “There has been no contact.”

Cheika, contracted to the Australian Rugby Union (ARU) until 2017, is now one of the highest profile names in international rugby coaching after guiding the Wallabies to the World Cup final just a year after taking charge.

A day after the World Cup final, which Australia lost 34-17 to defending champions New Zealand at Twickenham on October 31, Cheika was named World Rugby’s coach of the year.

Former Leeds coach Lancaster has a rather more modest CV but what has really put his position in jeopardy is that, under him, England became the first World Cup host nation to be eliminated from the tournament in the pool phase following defeats by Wales and Australia.

The RFU set-up a five-man panel to review England’s dismal World Cup campaign and Twickenham chiefs are due to receive their report on November 17.

One of the key decisions facing the RFU is whether to stick with Lancaster, whose England contract runs beyond the 2019 World Cup in Japan, or bring in someone else.

According to The Australian newspaper, former England international Leonard — a World Cup-winning prop back in 2003 — made contact with Cheika, who indicated after this year’s final that he wanted to carry on his work with the Wallabies.

England have never had an overseas coach and, with Lancaster not having resigned, there is no vacancy at the present time.

But that hasn’t stopped a flood of speculation about who might replace the Englishman.

In addition to Cheika, the likes of Wales boss Warren Gatland and Ireland’s Joe Schmidt — both New Zealanders — as well as South Africa’s Nick Mallett have all been linked with the England job.

So too has Eddie Jones, the Australian who was in charge of the Wallabies when England beat them in the 2003 final, after his impressive feat in guiding Japan to three wins at this year’s edition, including a shock victory over rugby giants South Africa — the biggest World Cup upset of them all.

Cheika will be back in England later this month to coach a star-studded Barbarians side, mainly made up of players from Australia, New Zealand and South Africa, in the invitational side’s 125th anniversary fixtures against Gloucester at Kingsholm on November 17 and Argentina at Twickenham four days later.