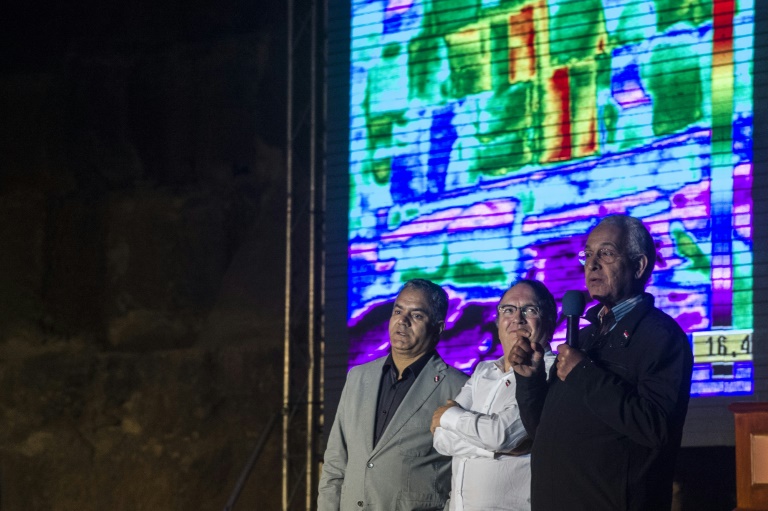 Operation Scan Pyramids began on October 25 to search for hidden chambers inside four pyramids including Khufu’s, the tallest and also known as the Great pyramid of Giza.

Two weeks on, the team of architects and scientists from Egypt, France, Canada and Japan said in a joint statement they had observed “thermal anomalies” on the monuments, including on the Khufu pyramid.

“The teams have concluded the existence of several thermal anomalies that were observed on all monuments during the heating up or the cooling down phases,” the statement said.

“To explain such anomalies, a lot of hypothesis and possibilities could be drawn up: presence of voids behind the surface, internal air currents,” it added.

In particular, it said, an “impressive” anomaly was found “on the eastern side of the Khufu pyramid at ground level”.

Thermal scanning of the massive structure indicated that some of the limestone blocks were hotter than others.

“This area should be the subject of further investigation during the subsequent phases of the project,” which is expected to last until the end of 2016, the statement added.

“Khufu will offer us today one of its secrets,” Egyptian Antiquities Minister Mamduh al-Damati told reporters at the pyramid.

But neither he nor the experts provided any tangible explanation for the anomalies, which could indicate the existence of a secret chamber.

The project also involves thermal scanning at the Khafre pyramid of Giza as well as two pyramids in Dahshur, all of them south of Cairo.

The two pyramids at Dahshur were built by Snefru.