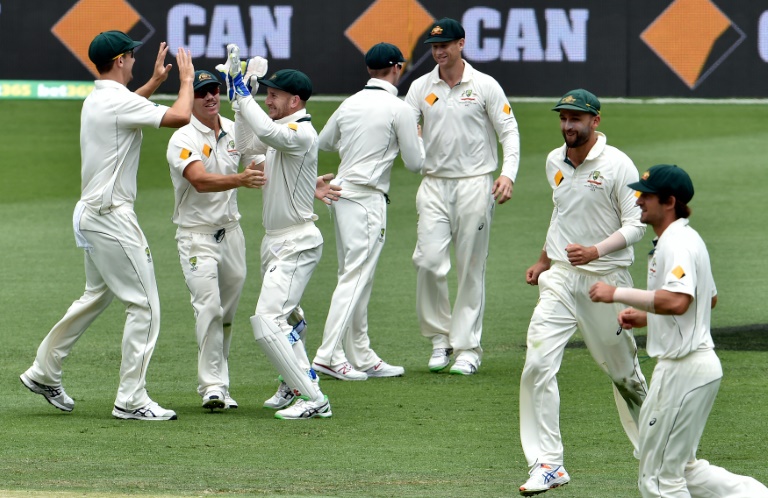 Australia crushed New Zealand by 208 runs but the Kiwis were left to curse a disputed decision against skipper Brendon McCullum on the final day of the first Test on Monday.

The Australians claimed the seven remaining wickets during the morning in Brisbane to go one-up in the three-Test series after dismissing the Black Caps for 295.

New Zealand were chasing a massive 504-run target after two innings declarations from the dominant home side, who easily maintained their 27-year unbeaten streak at the Gabba.

Pugnacious opening batsman David Warner was named man of the match after hitting centuries in both innings as the Australians powered away.

While the Kiwis were well beaten there was controversy over the dismissal of McCullum, who was his team’s shining light with a typically uninhibited knock.

McCullum was well set for his first Test century in Australia on 80, when he got a disputed call from English umpire Nigel Llong, who gave him out to a catch off his pad by Steve Smith at second slip.

McCullum protested, saying he had not hit the ball, but with their two referrals already exhausted he trudged from the ground, taking New Zealand’s hopes of staying in the match with him.

However, McCullum did not make a fuss about the incident at his post-match media conference.

“Thatâ€™s the game. Both umpires are two of the best in world cricket, outstanding umpires who are allowed to make the occasional mistake,” he said.

“Thatâ€™s just the game and youâ€™ve got to cop it sweet.

“I was a bit frustrated. I felt was playing okay and pretty determined to ensure we were able to keep batting deep into the afternoon. But Iâ€™ve been around long enough to know you get some go your way and some against you at times.”

Doug Bracewell went next ball, leg before wicket, putting Mitchell Marsh on a hat-trick which Tim Southee saw off.

But Southee was soon out to another dubious caught behind decision off Josh Hazlewood, with the game well and truly gone for the New Zealanders.

Mark Craig and Trent Boult defiantly added 46 runs for the last wicket, before Boult was caught behind for 15 leaving Craig unbeaten on 26.

Spinner Lyon finished with the best figures of three for 63 off 21 overs.

Ross Taylor was the first man out in the fifth over of the final day, gloving an attempted pull shot off Hazlewood to Smith at second slip for 26.

James Neesham, who came into bat despite being ruled out for the rest of the series with back trouble, lasted 33 balls before he popped an easy catch to Joe Burns at short leg off Mitchell Johnson for three.

McCullum hoicked Johnson over one of the longest boundaries at backward square leg for his second six to steam into the 70s.

It was McCullum’s 97th six in Tests, placing him tied for third all time behind Australia’s Adam Gilchrist with 100.

Lyon trapped BJ Watling leg before wicket for 14 with the Kiwi unable to change the umpire’s decision as he lost out on his referral.

It then went rapidly downhill for the Kiwis following McCullum’s removal, although Craig hit out lustily for the last wicket.

Australia’s Smith said it was a “satisfying performance”.

“New Zealand are a very good side and I’m sure they are going to come back hard at us, but it was nice to start off the series on a winning note,” Smith said.

“I thought the guys did a terrific job all week and the first morning really set the tone for us with Joe Burns and Davey Warner batting so well.”

New Zealand’s highest successful run chase in the fourth innings remains their 324 against Pakistan in Christchurch in 1994.