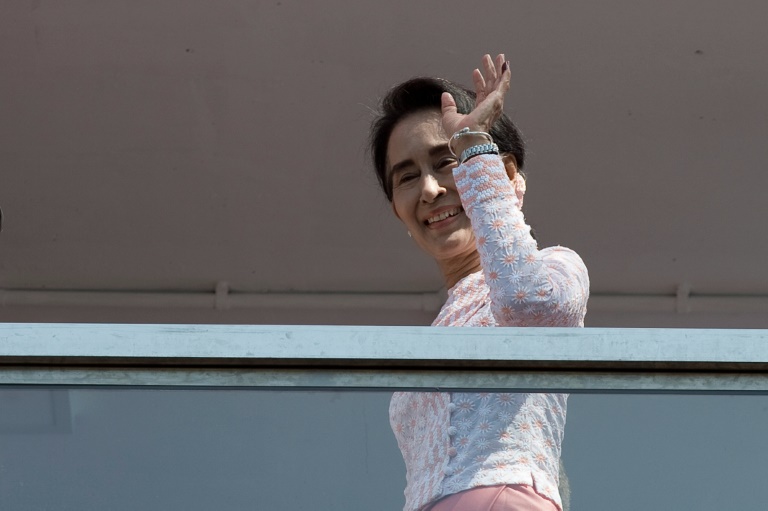 Aung San Suu Kyi’s opposition party said Monday it was set to claim over 70 percent of seats following Myanmar’s election, a tally that could sweep it to power after decades of military dominance.

Rapturous party supporters danced into the night after the polls closed, optimistic of victory from the first election the National League for Democracy has contested in 25 years.

Early counting appears to have swung in the NLD’s favour, said party spokesman Win Htein, predicting of a majority — although he said the party would wait for official results.

“We are on track to win more than 70 percent of seats around the country, but the election commission has not officially confirmed yet,” he told AFP.

He did not specify how the calculation was made and if he thought that percentage would translate into power.

The NLD needs 67 percent of available parliamentary seats to enjoy a majority.

That would be enough to overwhelm the ruling Union Solidarity and Development Party (USDP), whose military allies are gifted 25 percent of seats under the constitution.

But seats are also up for grabs in regional legislatures.

Suu Kyi herself was slightly more circumspect, but hinted at victory.

“It is not the time to congratulate our candidates who we think have won the election,” she told supporters and journalists from the balcony of her party’s Yangon headquarters.

But “people have an idea of the result even if I don’t say it,” she added.

Election authorities were expected to hold a press conference at 4:00 pm (0930 GMT) that could see some partial results announced.

They have said that preliminary figures would be released within 48 hours of Sundayâ€™s vote, and a full nationwide count in 10 days or so.

On the streets of Yangon, many voters were bullish about the NLD’s chances.

“I have no doubt about the results. I think everything is going to change,” said Yee Yee, 30, a spice seller at a market in central Yangon, who voted for the NLD.

Even the state-backed Global New Light of Myanmar declared the “dawn of a new era”, while USDP heavyweight Shwe Mann conceded on his Facebook page that he had lost his seat to his NLD challenger.

Sunday’s vote was filled with emotion for a nation that laboured under five decades of often brutal military rule which enriched the generals as it condemned millions to poverty.

The junta nominally gave up power in 2011, and the country has since spun through rapid change, with the quasi-civilian government launching reforms that brought the end of most international sanctions.

But that did nothing to dampen enthusiasm for democracy among the 30 million registered voters, many of whom began queueing before dawn to cast their ballot.

Among them were many first-time voters while others had last voted quarter of a century ago, only to see their hopes crushed by the military when it ignored the results, an outcome they hope will not be repeated this time around.

When the count began Sunday, early indications were of an “80 percent” turnout, according to Union Election Commission deputy director Thant Zin Aung — a figure the opposition believes favours their bid for a majority.

“We are waiting because we want to know the result,” said Muang Kyaing, 67, outside the party’s downtown base.

“Of course we have worries,” he said, floating fears of chicanery during the count tipping the balance away from the NLD.

President Thein Sein and the still-powerful army chief have both vowed to respect the outcome of the election — even if the army-backed Union Solidarity and Development Party loses its choke-hold on power.