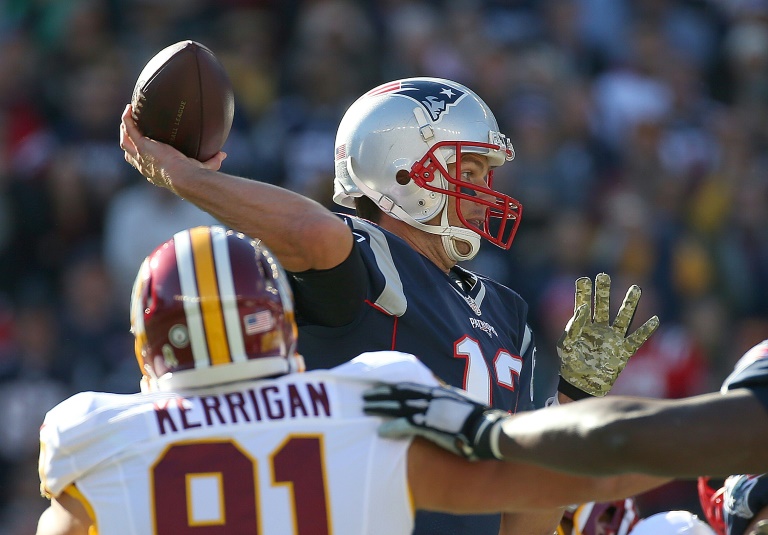 The New England Patriots and Carolina Panthers extended their unbeaten starts to the National Football League season with contrasting victories over the Washington Redskins and Green Bay Packers on Sunday.

Tom Brady and the Patriots made it eight wins out of eight with a comfortable 27-10 win over the Redskins in Foxborough while Carolina survived a thrilling late Green Bay comeback to win 37-29 in Charlotte.

Brady threw two touchdown passes while running back LeGarrette Blount ran for 129 yards and a touchdown as the reigning Super Bowl champions took command of the contest early on to leave the Redskins at 3-5 for the year.

Victory came at a cost for the Patriots however, with left tackle Sebastian Vollmer leaving the game with a head injury and running back Dion Lewis also hobbling out of the match with a knee problem.

A pulsating duel in Charlotte saw Cam Newton and the Panthers defy a late onslaught by Aaron Rodgers and the Packers to move to 8-0.

The Panthers had looked to be cruising to victory after holding a 23-point lead at 37-14 with 9:22 left in the fourth quarter against the Packers, whose offensive threat had been mostly snuffed out by the Carolina defense.

But Green Bay were given a glimmer of hope when a 29-yard screen pass to running back James Stark produced a touchdown.

Rodgers then hit tight end Richard Rodgers from three yards for a further touchdown to help take the score to 37-29 with 3:43 left.

The Packers seemed to be closing in on a miraculous comeback when they won a quick turnover and advanced down field on Carolina’s next possession.

But Rodgers was picked off on fourth and goal as Carolina’s defense held firm and the Panthers held on for the win.

The win could prove decisive in the eventual playoff picture in the National Football Conference, with Panthers now well placed to deny the rival Packers, who fell to 6-2, homefield advantage.

The Patriots and the Panthers are two of four teams with unbeaten records in the NFL this year. The Cincinnati Bengals are also 8-0, while the Denver Broncos, who play later Sunday, are 7-0.

In other games Sunday, a last gasp 38-35 win for the Pittsburgh Steelers over the Oakland Raiders was overshadowed by a fresh injury to veteran quarterback Ben Roethlisberger.

Roethlisberger, who threw for 335 yards and two touchdowns, limped out of the game in the fourth quarter with an injury to his left foot.

Roethlisberger, 33, only returned from injury last week in a loss to the Cincinnati Bengals after missing four games with a left knee problem.