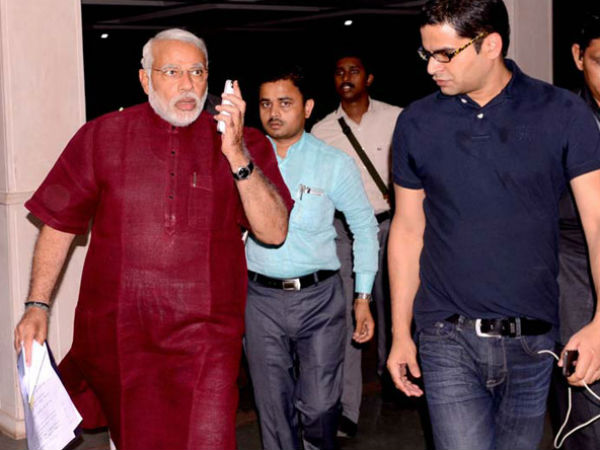 The bitterly fought Bihar elections are over, and the state has spoken in favour of the Nitish Kumar-Lalu Yadav combine, however, the 37-year-old architect of the brilliant campaign was once Narendra Modi’s own man.

The man, Prashant Kishor, was with Narendra Modi till recently, helping script the magnificent digital and over-all campaign, which gave him an unassailable lead over his opponents. Following the 2014 win, his involvement with Modi was short-lived, and Kishore left shortly, sidelined by the new hero in the Bharatiya Janata Party (BJP)—Amit Shah.

Kishor started working with Nitish this summer, and in his political ambition, he found his own personal stake. After all, on the other side was Shah’s BJP, making an ambitious bid for Bihar. Kishor dumped his trademark jeans and t-shirt look, for the socialist kurta pajama, and started working with Nitish. He was given an unhindered access to Nitish, as per his pre-conditions.

#BiharElections results decoded. Editor-in-Chief Saurabh Shukla with his one-minute analysis on what went wrong for Narendra Modi and what worked for Nitish Kumar. View and share this video now. For analysis http://mynm.in/gpar4x0

Posted by NewsMobile on Sunday, November 8, 2015

If the name of the machinery that Kishor built for Modi was Citizens for Accountable Governance (CAG), for Nitish , he built the Indian Political Action Committee (IPAC). This comprised of 70% IIT graduates, who left their high-flying jobs with MNCs.

Prashant himself had a UN job in Africa, which he quit before returning to India in 2011 to work with Modi. His team comprises of a dedicated social media unit, data crunchers, graphic designers, statisticians.

From alliance discussions, to rally plans, to posters, poll slogans, and billboard placements, it was this team that micromanaged everything. According to certain reports, Kishor even communicated between Nitish and Lalu, a job not entrusted to even seasoned politicians, for egos run high between the contemporaries.

It was Kishor’s gut sense that made him pitch for a Nitish-centric campaign. It is said that he does not believe in ideologies or parties much, but only on individual leaders who can deliver results—a Presidential form of politics.

For Bihar, he felt there was no one better than Nitish. Reports say that it was Kishor’s ingenuity that made the alliance announce the names of all 243 candidates in a go, while the BJP and its allies pondered and dithered, still unsure.

Sample some of the results of his genius – In his first rally in Bihar on July 25, when Prime Minister Modi hit out at Nitish’s political DNA, Kishor spinned an entire campaign around the barb, making it sound like an insult on Bihars’ DNAs. Bihari pride has been Nitish’s pet theme, anyway.

50 lakh nail and hair samples were sent from Bihar to the Prime Minister’s office, asking the PM to test if their DNA had any flaws.
Again, minutes before the rally was to start, Nitish Kumar’s Twitter handle tweeted a list of questions to the PM. The PM took the bait, and criticised the tweets in his rally, swaying from his agenda and speech.

It was Kishor who made the JD-U and RJD’s presence felt on social media, creating Facebook ad Twitter accounts for both Nitish and Lalu. When the PM floored all by announcing a Rs. 1.25 lakh crore package for the state, Kishor arranged for posters asking people not to be fooled by the promises.

Branded Nitish Kumar-bicycles, Swabhiman Raths, Parcha pein Charcha, Ghar Gar Dastak and the missed call campaign are some of the initiatives with which the IPAC team tried to outdo the BJP’s poll juggernaut.

Kishor has certainly started to change the way elections are fought in India. While Modi was the first to be open to the new kind of politicking, his bête noire Nitish picked it up second. How much longer before this becomes the standard template for fighting elections?

His goal now established, Kishore is looking for a break, as the list of his prospective clients keeps growing.