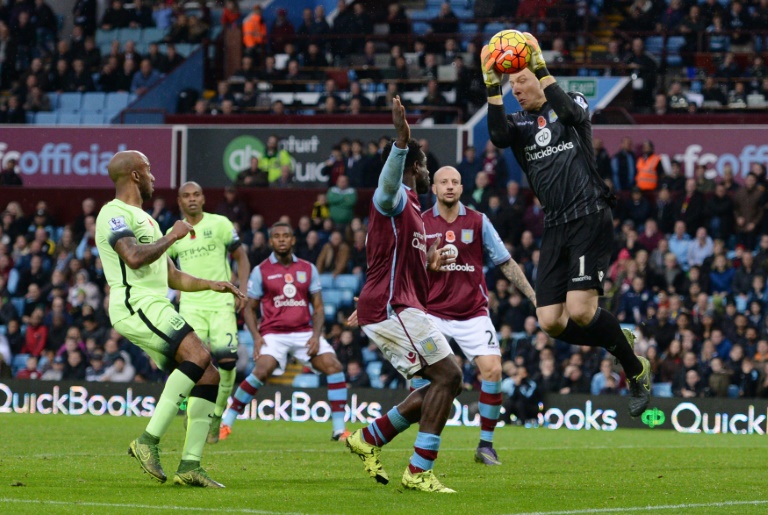 Premier League leaders Manchester City and nearest challengers Arsenal were both held to draws on Sunday as they each dropped points in the title race.

City, surprisingly, could only manage a goalless draw away to bottom-of-the-table Aston Villa, the Birmingham club marking new French manager Remi Garde’s first match in charge with a point that owed much to a fine display by goalkeeper Brad Guzan.

Arsenal, who kicked off later on Sunday, knew that if they beat arch-rivals Tottenham Hotspur in the North London derby they would leapfrog City, who they still trail on goal difference, at the top of the table with a victory at the Emirates Stadium.

But instead they had to make do with a 1-1 draw.

Meanwhile Liverpool suffered their first defeat in seven games under new manager Jurgen Klopp with a 2-1 loss at home to Crystal Palace.

Manuel Pellegrini lost the services of Wilfried Bony to a hamstring injury and then watched in frustration as City failed to make their second-half domination count in a match where Villa ended a dismal run of seven successive defeats.

City had to operate without a recognised frontman for more than an hour, although Raheem Sterling, Kevin de Bruyne and Fernando all wasted gilt-edged chances to secure victory in the closing stages at Villa Park.

A delighted Garde, appointed after Villa sacked former manager Tim Sherwood, told the BBC. “It was a nice experience and a fantastic atmosphere. It was a tough game. I can be very happy with my team today.

“Making sure we were well organised defensively was my priority,” the former Arsenal and France midfielder added.

City were left ruing the missed chances, and the continued absence of Sergio Aguero.

“They (Villa) had one shot in the whole game. I was happy with the way we played, especially in the second half but we were unlucky not to score.”

At the Emirates, Arsenal fell behind to a 32nd-minute goal from Spurs’ Harry Kane, who got on the end of a clever ball over the top from Danny Rose and went past Laurent Koscielny, mistakenly trying to play the England forward offside, before rolling a shot across Petr Cech.

At that stage, Arsenal hadn’t managed a single shot on target and they had to wait until the 77th minute to draw level when substitute Kieran Gibbs bundled in a volley at the far post from Mesut Ozil’s cross, although Spurs goalkeeper Hugo Lloris ought to have saved the shot.

In the mid-table clash at Anfield, visitors Palace went ahead when Yannick Bolasie scored from 12 yards in the 21st minute.

Liverpool, however, were level shortly before the interval through Brazil playmaker Philippe Coutinho’s close-range effort.

London club Palace bounced back to score the winner eight minutes from time when Liverpool-born Scott Dann saw his header from a corner blocked by Reds goalkeeper Simon Mignolet, only for the Eagles defender to nod in the rebound.