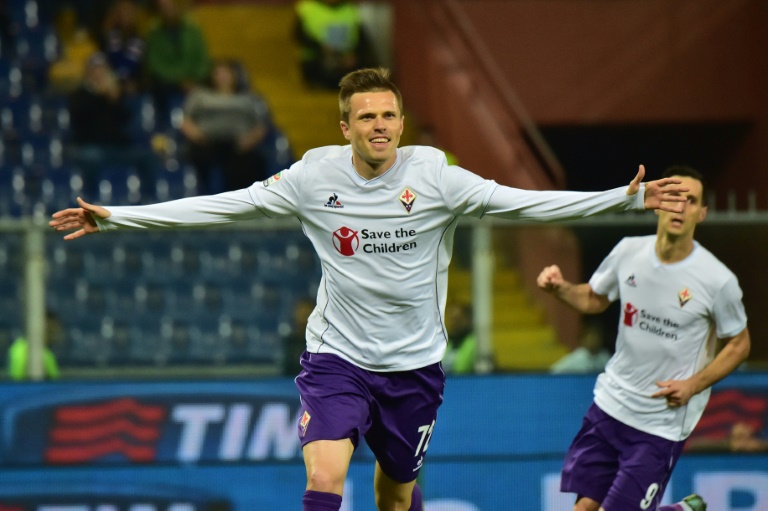 Fiorentina retained their grip on top spot in Serie A on Sunday with a 2-0 victory at Sampdoria while Roma beat derby rivals Lazio by the same scoreline to maintain their title challenge.

Elsewhere, Napoli stayed in the hunt after Gonzalo Higuain scored his 200th career goal, his 64th for the Azzurri, in a 1-0 home win over Udinese.

Champions Juventus, meanwhile, moved up to seventh place after goals from Mario Mandzukic, Patrice Evra and Paulo Dybala secured a second successive league win for the first time this season in a 3-1 victory at Empoli, where Massimo Maccarone hit a 19th minute opener.

Meanwhile, Inter Milan had temporarily gone top after Geoffrey Kondogbia struck his maiden Serie A goal to steer Roberto Mancini’s men to a 1-0 victory away to Torino.

Fiorentina though were deserved winners at the Luigi Ferraris stadium where they went ahead after just 10 minutes when Josip Ilicic, scorer of both goals in Thursday’s 2-0 Europa League victory at Lech Poznan, converted a penalty following a handball by Ervin Zukanovic.

Despite a string of fine saves from home goalkeeper Emiliano Viviano, La Viola doubled their advantage just prior to the hour as Nikola Kalinic combined cleverly with Ilicic before the former tapped home his seventh goal of the campaign with Fiorentina moving back above Inter on goal difference.

Earlier, against the backdrop of a fans’ protest that saw the Stadio Olimpico only half full for the fiercest city derby in Italy, hosts Roma made light of the thousands of empty seats to further underline their scudetto credentials.

While delighted with the win, Roma coach Rudi Garcia was furious at Senad Lulic’s tackle on Mohamed Salah that saw the Egyptian winger stretchered off with a suspected sprained ankle.

“It will be a miracle if it’s not fractured. Tackles like that don’t belong in football, even in a derby,” said Garcia.

He added: “The speed of Gervinho and Salah was decisive, especially on the counter. But we did everything right today. We pressed up high, shut down spaces and got in behind their defence.

“I think we fully deserved the win.”

Roma were in command from the outset and were rewarded in the ninth minute when Edin Dzeko stepped up to beat Federico Marchetti from the penalty spot after Santiago Gentiletti’s clumsy challenge, which looked to be be just outside the area.

It was Dzeko’s second league goal for Roma but second in a week after hitting the net in a 3-2 Champions League win over Bayer Leverkusen.

“This is a special day. Not just for me, but for all of the players experiencing their first taste of the derby,” said Dzeko. “It was vital to get the win.”

Lazio coach Stefano Pioli said the penalty decision changed the direction of the game, during which Lazio’s Brazilian star Felipe Anderson rattled the crossbar with a superb drive after nutmegging William Vainqueur.

“We had our chances just as much as Roma but what made the difference was two episodes, one of which we had no control over,” Pioli said referring to the penalty.

“The other (Gervinho’s goal) was our fault, our responsibility and in the end we paid the price. This is our third consecutive defeat of the season and it’s not an ideal situation for us.”

Yet Roma’s well-oiled midfield, superbly marshalled by Belgian international Radja Nainggolan, was virtually untouchable and Roma doubled their lead just after the hour.

Gervinho’s pace took the Ivorian on to Nainggolan’s incisive through ball and past defender Dusan Basta before beating Marchetti at his near post to send the majority of the 35,252 crowd wild.

Juventus coach Massimiliano Allegri admitted they will just have to keep plugging away in a bid to close the gap.

“I can understand that it’s not great to see us in seventh place after 12 games, but that’s the way it is. You can’t change it all in one game and so we have to continue step by step,” he said.

This season’s title battle looks a far from straightforward affair and Inter coach Mancini admitted that his side, compared to Juventus and Roma, are still up and coming.

“The others have an advantage because they have been playing together for a long time. Weâ€™ve been together since August,” said Mancini.