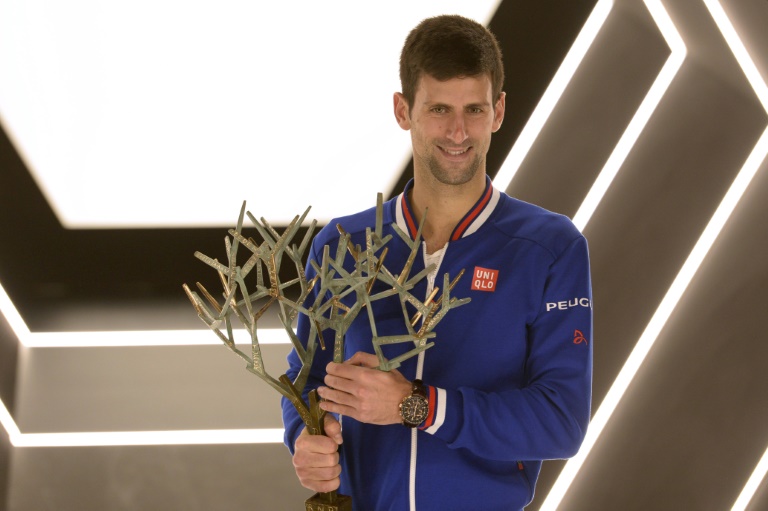 Novak Djokovic says he has reached the peak of his career by taking a “holistic approach”, leaving nothing to chance.

The 28-year-old Serb put the finishing touches to one of the greatest years in tennis history on Sunday when he swept aside old rival Andy Murray 6-2, 6-4 in the final of the Paris Masters.

The tournament was the final one of the ATP regular season and the victory etched his name in the record books.

Djokovic, who is now firmly in the mix with Rod Laver, Roger Federer and Rafael Nadal for the label of the greatest player ever, insists that on sheer talent alone he would never have hit such dizzy heights.

“I think there are a few reasons why I have managed to reach my peak at this stage of my career this year,” he said after his defeat of Murray.

“I think in terms of physical and mental ability, I have reached my peak experienceâ€‘wise.

“Of course I did go through certain periods that had more doubts and, you know, I wasn’t as successful. It all served as a great lesson, as a way to improve and to get better. So this season, everything got together.

“I’m a married man, and I’m a father, as well. I think I have a nice balance and serenity in my private life that reflects on the professional life, and vice versa.

“I have this belief that the holistic approach will definitely get the best out of yourself.

“I’m still determined to improve, to get better. Nobody can be perfect, but, you know, if you are going for the perfection, you might reach excellence.

“That’s the kind of mind set I have. Try to work every single day with a purpose.”

It was not always so controlled and driven for the Serb, who had to leave his hometown of Belgrade at an early age to train in Germany and who had to overcome both physical and mental obstacles when he first entered the pro scene.

There were even charges that he was a choker and a bit of a hypochondriac as he struggled to deal with the physicality of Nadal and the legend of Federer.

But all that changed with his maiden major win in the 2008 Australia Open and then his wonder run in 2011 when he won the Australian and US Opens as well as Wimbledon.

He now has 10 Grand slam titles, four shy of Nadal’s haul and seven away from the all-time record of Federer.

But at 28 and in the peak of his career, overtaking them both is a very realistic target.

“I have been through stages in my life where I struggled a lot physically, especially in the beginning of the professional career. But, all those experiences in the past have helped me to get stronger, to learn from those experiences, to understand myself, my body,” he said.

“I try to take nothing for granted. I try to work on it all the time, because I know that that is the only way I’m managing to stay successful, is to continue progressing.

“I’m not trying to keep the status quo, because for me then that’s a regression.

“I just try to progress, improve all the time, work on certain things in my life and my game, and hopefully get better in the process, which I feel I’m doing now.”

“I look forward to it, especially because of the fact that I have had the season that I have had, and the way that I’m feeling confidently. Hopefully I can finish off the season with another great win,” he said.