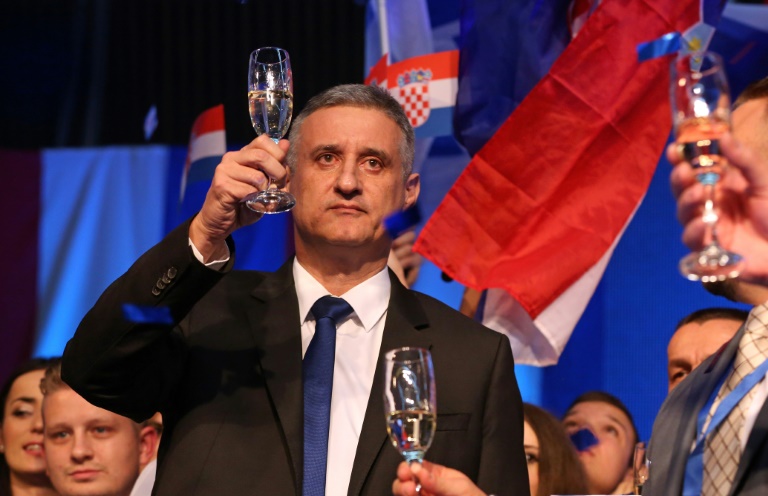 Croatia’s conservative opposition looked set to return to power after narrowly winning a general election, preliminary results showed Monday, but tough government negotiations loom in a country emerging from years of recession and grappling with a wave of migrants.

“We won the parliamentary elections… The victory brought us responsibility to lead our country, which is in a difficult situation. Whoever wants to fight with us for the quality of life in Croatia is welcome,” opposition leader Tomislav Karamarko of the HDZ party told cheering supporters.

Sunday marked the country’s first parliamentary election since joining the European Union in 2013, and it remains one of the bloc’s poorest-performing economies.

The new government will be under pressure to push through much-needed reforms in Croatia as it slowly emerges from six years of recession, and must oversee the transit of tens of thousands of migrants through the country of 4.2 million people.

Results showed the HDZ-led Patriotic Coalition taking 59 seats in the 151-seat parliament, with the centre-left bloc, in power for the past four years, falling behind with 55 seats, based on votes from nearly 70 percent of Croatia’s 6,500 polling stations.

“I believe that we will have a new prime minister-designate soon,” said President Kolinda Grabar-Kitarovic, who also hails from the HDZ.

According to the constitution, the president must consult parliamentary parties and nominate a prime minister-designate who has the support of the majority of MPs. Negotiations could last for days.

New political party Most (“Bridge” in Croatian), was set to become a powerful force in national politics, coming third with 19 seats, although leader Bozo Petrov repeated a pre-electoral pledge that his party would not enter a coalition.

The government led by Prime Minister Zoran Milanovic of the Social Democrats, elected in 2011, disappointed voters by failing to reform the public sector and boost the business climate.

Defiant Milanovic nevertheless called on Most to form a coalition with his centre-left bloc, telling his supporters: “We cannot go alone and we need partners.”

Ahead of the vote, the premier appeared to have been buoyed by his handling of the migrant crisis, which has seen nearly 350,000 people passing through Croatia on their way to northern Europe since mid-September.

But the economy remained the biggest issue on people’s minds and both main political camps lacked solid campaign pledges to reform, analysts said.

The HDZ was ousted four years ago amid a series of unprecedented scandals involving its former leader and ex-prime minister Ivo Sanader.

The party could take a harder line on the influx of migrants, having accused the government of lacking control over the flow of people since the crisis spread into Croatia.

But its election campaign focused on patriotic rhetoric glorifying its founder Franjo Tudjman, who led the former Yugoslav republic throughout its 1990s war of independence until his death in 1999.

The ruling coalition meanwhile, campaigning with the slogan “Croatia is Growing”, consistently accused the opposition of corruption.

Croatia’s public debt stands at nearly 90 percent of gross domestic product and unemployment was at 16.2 percent in September — 43.1 percent among youths.