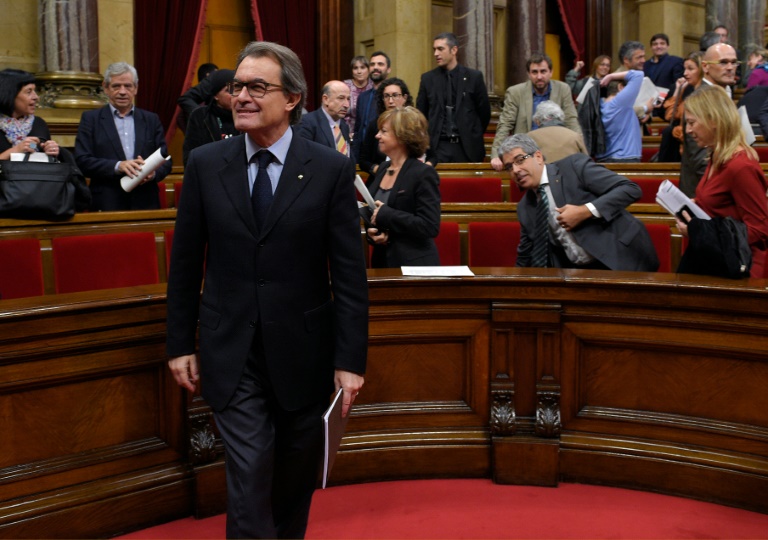 Lawmakers in Catalonia officially kicked off a process to secede from Spain by 2017 despite impassioned pleas against independence, in an unprecedented showdown with Madrid’s central government.

All 72 pro-independence lawmakers — the majority in the regional parliament — voted for a resolution to secede from the rest of the country, drawing huge applause that drowned out opposition MPs holding Spanish flags.

Catalonia’s independence movement is an increasingly prickly thorn in the side of conservative Prime Minister Mariano Rajoy, who said his government would go to the Constitutional Court to challenge the resolution.

“I will sign a (legal) recourse of unconstitutionality and will ask for… the immediate suspension of this initiative and all its possible effects,” he said in a televised statement shortly after the vote.

The text calls on the regional assembly to start working on legislation within 30 days to create a separate social security system and treasury, with a view to complete independence within 18 months.

The resolution has the backing of Catalan president Artur Mas’ Together for Yes coalition and the smaller far-left separatist CUP party.

“With this resolution, we are solemnly kicking off the construction of a state,” Raul Romeva of Together for Yes told regional lawmakers.

“Many people are going to live this day with a lot of emotion.”

But Rajoy has the support of the main opposition Socialists and new, popular centre-right group Ciudadanos.

“I was born in Catalonia and I want to keep living here,” Xavier Garcia Albiol of Rajoy’s ruling Popular Party (PP) said during the debate.

“While you are spending your time and efforts to break up Catalonia from the rest of Spain, 600,000 Catalans go out on the street every day to look for work,” he told pro-independence lawmakers.

“While you are dedicating your time to creating state structures, 1.5 million Catalans live in precarious conditions.”

Catalonia, a region of 7.5 million people with its own language that accounts for a fifth of Spain’s economic output, already enjoys huge autonomy in education, health and policing.

But it demands even greater autonomy, particularly where taxation is concerned, estimating that it gives more to the central government than it receives.

A 2010 decision by Spain’s Constitutional Court to water down a 2006 statute giving the region more powers has added to the growing pressure for secession.

Rajoy said the government’s appeal to the Constitutional Court would be filed on Wednesday after an emergency cabinet meeting.

But those who crafted the declaration had anticipated this, and the resolution states that the secession process will not be subject to any decision made by Spanish institutions, including the court.

The government has also raised the possibility of invoking article 155 of the Spanish constitution, which allows Madrid to supersede the authority of a regional government that is acting outside the law or cut off its funding.

Catalonia tried to hold an official referendum on independence last year, but judges ruled it was against the constitution, arguing that all Spanish people have the right to decide on matters of sovereignty.

The region pressed ahead anyway and held a symbolic vote. Over 80 percent of the participants (2.3 million) voted in favour of independence.

“A referendum would be the ideal tool but the Spanish government blocked it. We have no other option but unilateral action,” CUP lawmaker Albert Botran told AFP.

While Catalan separatist parties won a majority of seats in the regional parliament in September polls, they failed to win a majority of all votes cast — a fact emphasised by their opponents.

“Everything is unconstitutional, illegal and undemocratic, because they lie when they say the majority of Catalans back a decoupling,” said Ciudadanos chief Albert Rivera.