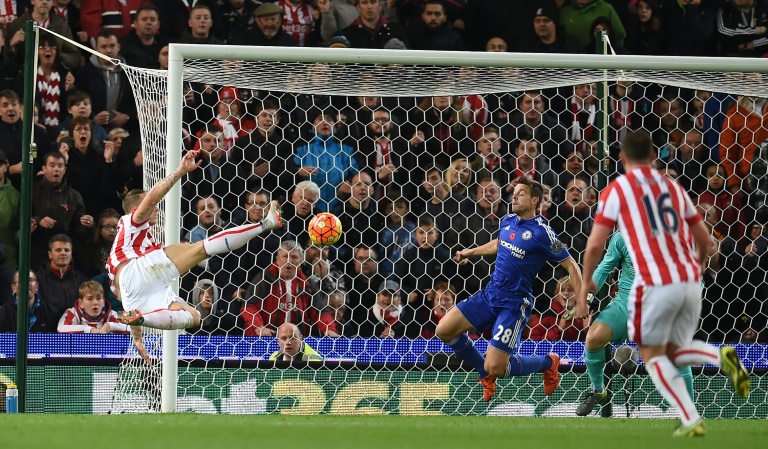 Mourinho dubbed Arnautovic “unmanageable” during their time at Inter Milan, but the Austria forward may have had the last laugh with an acrobatic 53rd-minute volley at the Britannia Stadium.

It condemned Chelsea to a third straight league defeat, their seventh in total, and left them in 16th place in the table, heightening the risk that Mourinho, absent from the game due to a stadium ban, will be sacked.

Handed a one-game stadium ban for berating referee Jon Moss at half-time of his side’s recent defeat at West Ham United, Mourinho watched the match at a nearby hotel and with the international break due to begin, he may not be given a chance to return to the dug-out.

Chelsea’s fans, at least, continue to believe in the club’s most successful manager and showed their support by donning Mourinho masks and chanting his name.

In continuity with their mid-week win over Dynamo Kiev, Chelsea produced a lively first-half display and went close when Diego Costa forced Stoke goalkeeper Jack Butland to save with his legs.

But they fell behind eight minutes into the second half when Chelsea old boy Glen Johnson’s right-wing cross was inadvertently helped on by Jon Walters to Arnautovic, who volleyed in superbly at the far post.

Pedro Rodriguez hit the post and Eden Hazard put a shot inches wide as Chelsea pushed for a leveller, while Loic Remy hurdled Butland late on, but in trying to stay on his feet he lost balance and shot off-target.

Elsewhere, Jesse Lingard’s first Manchester United goal inspired his side to a 2-0 win over West Bromwich Albion that left Louis van Gaal’s team a point shy of the league summit.

United had ended a 404-minute goal drought against CSKA Moscow in mid-week, but they laboured again until Lingard broke the deadlock by coolly curling home from outside the box in the 52nd minute at Old Trafford.

Juan Mata added a stoppage-time penalty after Gareth McAuley had been sent off for chopping down the fleeing Anthony Martial.

Van Gaal’s side remain fourth, but they are now just a point below co-leaders Manchester City and Arsenal, both of whom play on Sunday, and third-place Leicester City, who won 2-1 at home to Watford.

“Everybody knows who has played football that the most difficult way to score is against a very defensive team,” Van Gaal told the BBC.

“You need patience. In the second half West Brom are more tired and the chances come.”

At the King Power Stadium, Jamie Vardy scored for the ninth league game running as Leicester sank Watford to continue their fine start to the season.

A howler from Heurelho Gomes saw the Watford goalkeeper allow N’Golo Kante’s toe-poke to trickle through his fingers in the 52nd minute.

Gomes then fouled Vardy inside the box and the England forward netted the ensuing spot-kick after regular penalty-taker Riyad Mahrez stood aside. Troy Deeney replied from the spot for Watford.

It made Vardy the first English player to score in nine successive Premier League games and left him within one game of former United striker Ruud van Nistelrooy’s record.

“It’s great for Jamie Vardy to score again,” said Leicester manager Claudio Ranieri. “I don’t know if it’s another record, but he continues in a good moment.”

West Ham United failed to make ground on the leaders after a 1-1 draw at home to Everton, who levelled through Romelu Lukaku after Manuel Lanzini had put the hosts ahead with a fine, bending effort on the half-hour.

Newcastle United climbed out of the relegation zone at Bournemouth’s expense after a a 27th-minute Ayoze Perez strike and a string of saves by goalkeeper Rob Elliot earned them a smash-and-grab 1-0 win at Dean Court.

Sunderland remain in the bottom three, four points from safety, after losing 1-0 at home to Southampton, who prevailed courtesy of Dusan Tadic’s 69th-minute penalty.

But Norwich City pulled away from danger, climbing above Chelsea and Newcastle after Jonny Howson’s 70th-minute tap-in gave Alex Neil’s men a 1-0 home win over over Swansea City.