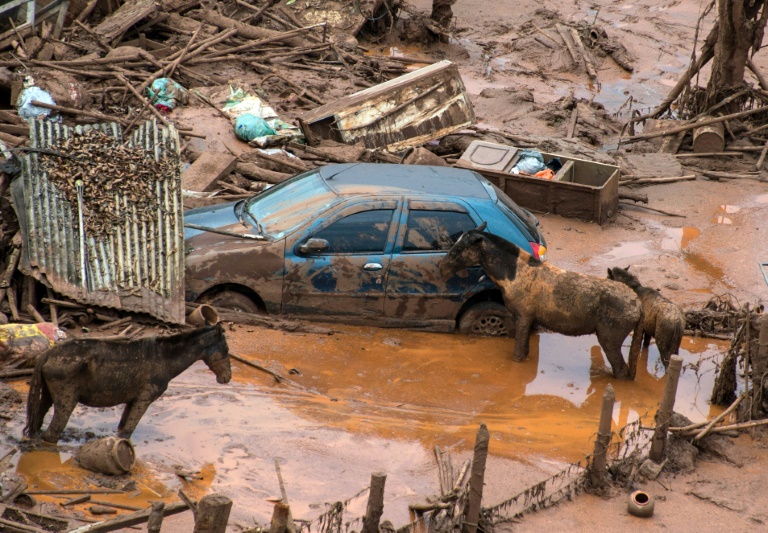 Rescuers searched for a third day Saturday the site where an avalanche of mud and mining sludge buried a village in southeastern Brazil, as authorities struggled to pin down the number of dead and missing.

Some two dozen people remain unaccounted for, but so far just one person has been confirmed dead, as hundreds of firefighters, soldiers and civil defense workers probed the disaster scene for signs of life.

The tragedy occurred when waste reservoirs at the partly Australian-owned Samarco iron ore mine burst open, unleashing a sea of muck that flattened the nearby village of Bento Rodrigues on Thursday.

Since then, the tidal wave of sludge has continued its destructive advance, leveling a neighborhood and the main plaza in the town Barra Longa 60 kilometers (35 miles) away but causing no loss of life there, a spokesman for the mayor’s office told AFP.

Families of the missing, meanwhile, were desperately seeking news of their loved ones, amid widely disparate official information.

Authorities have given contradictory tolls of the dead and missing in and around the village of Bento Rodrigues.

But there have been varying casualty counts from jurisdictions in and near the disaster zone.

The mayor of Mariana, the nearest city in the state of Minas Gerais, said his town’s official toll now stands at one dead and 12 missing, all of them mine workers — revising an earlier toll of 13 missing.

He said however that an undetermined number of people remain unaccounted for in nearby Bento Rodrigues, a village with a population of about 620.

“There is only one confirmed death so far, but it is logical that (the number) will surely rise,” Mayor Duarte Goncalves Junior said.

He said officials were interviewing residents to determine the number of people missing, “but we haven’t been able to arrive at a figure.”

The head of Mariana’s firefighting force, Adao Severino Junior, had said earlier that there were at least 17 dead, adding to the confusion.

Meanwhile, flyers were circulated with the picture of a missing five-year old named Emanuely, who slipped from her father’s arms as he ran ahead of the torrent carrying her and her two-year-old brother, the newspaper O Globo said.

“We saw him coming with the two children, but he wasn’t able to hold on to them,” Marlon Celio, 19, a neighbor, told the newspaper.

“We helped grab him, but lost the girl,” he said.

The cascade of debris began with the collapse of a dike at a reservoir holding 55 million cubic meters of mining waste, which spilled into an adjoining valley.

A short time later, another reservoir with seven million cubic meters of water broke, and the mass of liquid sludge swept over Bento Rodrigues some two kilometers away.

“There was a horrible noise and we saw the mud approaching. We ran for it. It is a miracle that we are still alive,” said Valeria de Souza, 20, with a baby in her arms and tears in her eyes.

No warning sirens were sounded, the company said. Instead, it said it called the civil defense authorities, some families and community leaders to warn them.

Panicked villagers ran screaming toward high ground and from there watched as their houses were swallowed in a river of mud.

About 500 people were evacuated from the village on Thursday after washing off the mud and mineral residue with soap and water.

Besides leveling everything in its path, the avalanche caused “enormous environmental damage,” said Carlos Ferreira Pinto, an investigator with the Minas Gerais state prosecutor’s office.

The local Mariana miners’ union said the sludge was toxic, but Samarco said it was “inert” and contained no harmful chemicals.

The head of Samarco’s emergency planning operations, Germano Silva Lopes, told a news conference the company had detected a tremor, but no anomalies in the dams before they burst.

Samarco is jointly owned by BHP Billiton of Australia and Vale of Brazil.