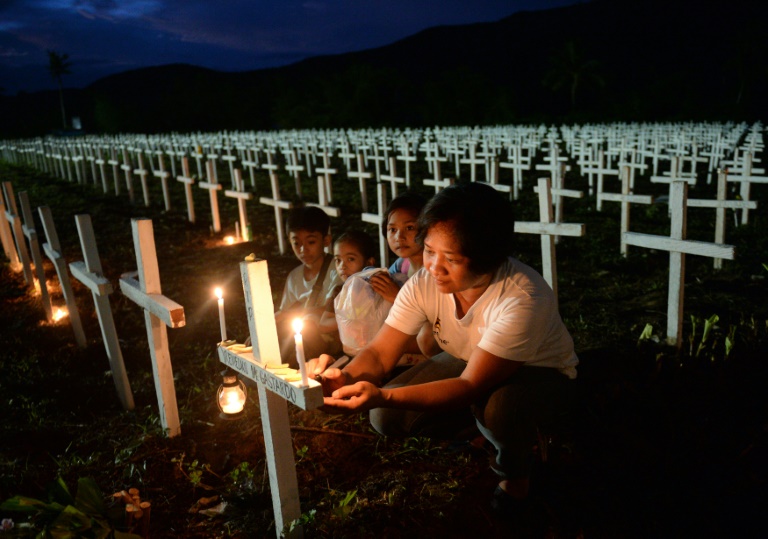 The Philippines Sunday marked the second anniversary of Typhoon Haiyan – with the bodies of possible victims of the disaster which left at least 7,350 people dead or missing still being uncovered.

Thousands of residents marked the two-year milestone in the city of Tacloban, which was devastated by the huge storm, as memorials were unveiled and masses held.

The unidentified skeletal remains were found by a man scavenging for wood in the outskirts of the city, according to Tacloban fire chief Charlie Herson.

“These are possible victims of the typhoon. They were buried by debris, in piles of wood,” he told AFP.

Haiyan, the strongest typhoon ever recorded to hit land, smashed into the central Philippines on November 8, 2013. The once-thriving city of Tacloban on the island of Leyte suffered the worst damage with hundreds of houses washed away by a storm surge.

To mark the tragedy Sunday, special memorials were unveiled and Roman Catholic masses were said for the victims, including the more than 2,400 mostly-unidentified bodies buried in a mass grave in Tacloban.

Thousands of Tacloban residents are still living in makeshift temporary homes as questions are raised about the speed of reconstruction.

President Benigno Aquino’s spokesman Edwin Lacierda said there would “always be discussions” on the speed of reconstruction, adding: “We understand such sentiments.”

But he added despite local critics, foreign agencies, including the United Nations, had said the Philippines was rebuilding faster than other developing countries struck by comparable natural disasters.

“What befell us was massive and we are continuing to provide assistance… always following our principle, to build back better,” he said.

However, local congressman, Ferdinand Martin Romualdez, said “this is still not yet the old Tacloban. This is still not the old Leyte. It will still be a long time before things get back to normal.”

Some Tacloban residents are still clinging to hope their missing loved ones are still alive.

Single mother Angelina Marquez, 17, said she hoped Remegildo, the father of her child, would reappear two years after he went missing during the storm.

“I still believe that he may have been washed away to a different place and the time will come, like in the movies, when he will come back to me,” she said.