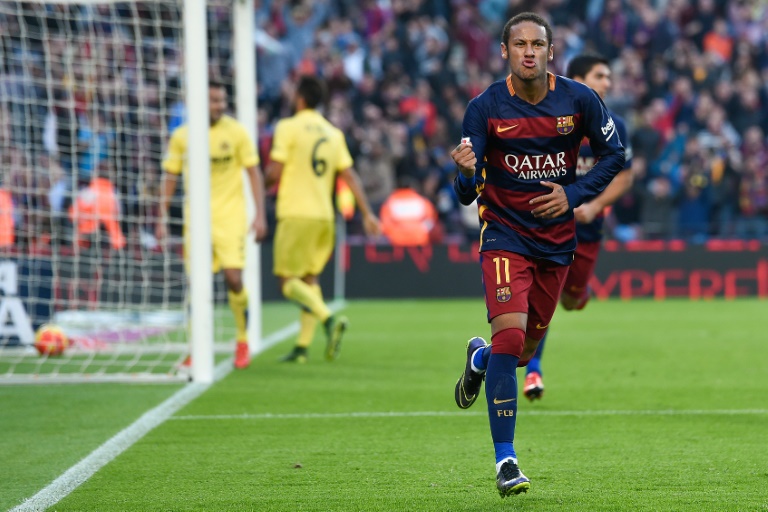 Neymar and Luis Suarez once again shone for Barcelona in Lionel Messi’s absence as Barcelona beat Villarreal 3-0 to move three points clear at the top of La Liga on Sunday.

The European champions were frustrated by a solid first-half display from the visitors, but finally made the breakthrough on the hour mark when Neymar slotted home Sergio Busquets’s through ball.

Neymar then stood aside to let Suarez seal the three points from the penalty spot after Munir El Haddadi had been brought down by Jaume Costa.

And the Brazilian rounded off a sensational display as he volleyed home a stunning third five minutes from time.

Real Madrid can move back to the top of the table on goal difference with victory at Sevilla later on Sunday.

Barca’s next outing comes against Madrid at the Santiago Bernabeu on November 21.

“I am happy with what I am giving the team, but I still think I can improve more,” Neymar told Canal Plus.

“As a team we all have to keep growing, but now we can rest and think about El Clasico.”

Between them Suarez and Neymar have compensated for Messi’s injury layoff with knee ligament damage by scoring all of Barca’s last 17 league goals as the Catalans have dropped just three points since the Argentine went off injured against Las Palmas six weeks ago.

Villarreal managed to limit the supply to the star South American duo for the first 45 minutes as Jeremy Mathieu had Barca’s best chance when his low drive at the end of a flowing counter-attack was well saved by Alphonse Areola.

The visitors also had their chances on the break as Roberto Soldado puled a shot just wide when well-placed on the edge of the area before Claudio Bravo made a brave save at the feet of Samu Castillejo in the final action of the half.

Both Neymar and Suarez were booked within the first two minutes of the second-half for taking their protestations towards referee Clos Gomez too far as nerves began to spread around the Camp Nou.

However, they finally found a way through when Busquets intercepted Bruno Soriano’s pass and freed Neymar to fire home at the near post.

Only another great save from Areola prevented Andres Iniesta from doubling Barca’s advantage moments later.

However, the French ‘keeper was helpless when Costa dived in on Munir and Neymar, who had taken Barca’s last four penalties, allowed Suarez to score his 13th goal of the season.

The best was yet to come from Neymar, though, as he collected Suarez’s pass and lifted the ball over Costa before turning to fire home on the volley.

Earlier, Athletic Bilbao moved into the top half of the table with their fifth consecutive win in all competitions thanks to Inaki Williams’s wonder goal in a 3-1 victory over Espanyol.

The 21-year-old striker opened the scoring with his fifth goal in a week as he flicked the ball over Enzo Roco before unleashing a spectacular volley into the top corner.

Hernan Perez levelled for the visitors just after half-time before Raul Garcia headed home the winner 26 minutes from time.