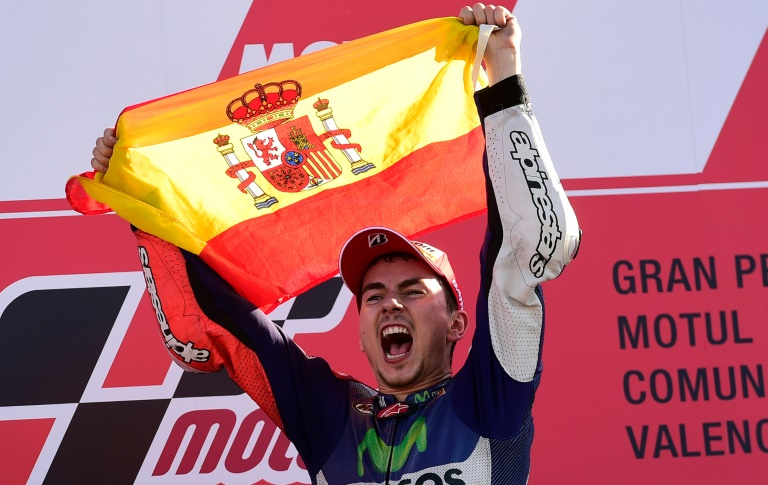 Jorge Lorenzo claimed his third MotoGP world title at the Valencia Grand Prix on Sunday amid acrimony and accusations of collusion from his vanquished Yamaha teammate Valentino Rossi.

Rossi went into the season-closing race seven points clear of Lorenzo, but the Italian legend was left with a Herculean task starting from the back of the grid as punishment for pushing Marc Marquez off his bike in Malaysia.

Rossi surged dramatically through the pack to finish fourth but Lorenzo led from pole to flag, despite intense pressure from his Spanish compatriots, Honda duo Marquez and Dani Pedrosa.

All eyes were on Marquez to see if he could overtake Lorenzo after his spat with Rossi who accused the two-time world champion of conspiring to help Lorenzo win the title.

And after losing out on a 10th world title Rossi railed to Marca: “Incredible work by Honda eh?

“I knew it would be like that and so it was in the end.”

He accused Marquez of turning into “Lorenzo’s bodyguard”.

“It has never happened in sport and it has been embarrassing for our sport,” he said.

“At least the fans have seen what was Marc’s plan and I don’t want to comment on his behaviour. I suppose in the coming months he will understand what he has done, it is an ugly end to the championship, a disappointment on the track.

“Lorenzo deserves the title, but he is not a real champion because something has happened in this sport that had never happened before and Lorenzo can’t be happy.”

In a bizarre twist, Lorenzo appeared to support Rossi’s claim in an interview with Movistar MotoGP channel

Whilst denying that “any pact” existed between him and Marquez he intimated that his compatriots had helped him win the title by not passing him.

“They knew what I had in play,” Lorenzo said.

“The fact they are Spaniards like me helped me.

“That helped me because for sure in another kind of race they would have tried to overtake which they didn’t this time.”

He added: “If Valentino had been in my position and with Italians behind they would have done exactly the same.

“The title had to be for Spain.”

With 110,000 fans watching Lorenzo claimed his third MotoGP title and fifth overall by five points from Rossi with outgoing champion Marquez in third.

He received his trophy from Spain’s King Juan Carlos, but not before giving Spain’s former head of state a warm bear hug.

Marquez meanwhile brushed aside any suggestions he and Pedrosa had helped Lorenzo.

“Dani and I tried 100 percent and that was shown whether it was here, in Malaysia, in Australia, in other races, we always gave 100 percent.”

When asked about Rossi fans thinking he had colluded to help Lorenzo Marquez replied: “For a winner, accusations of letting another person win is a lack of respect and an insult because we always go out to win.”

Kent needed just a point in Spain to ensure he couldn’t be overtaken by Portugal’s Miguel Oliveira and climbed from 18th on the starting grid to finish ninth.

Barry Sheene was the last British champion back in 1977.

Oliveira won his third consecutive race ahead of Spain’s Jorge Navarro and Jakub Kornfeil of the Czech Republic.

In Moto2, Spain’s Tito Rabat claimed his third win of the season.