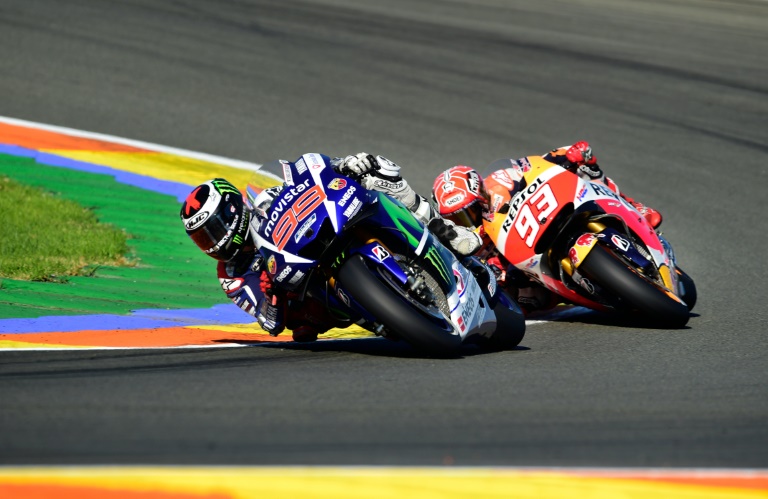 Spain’s Jorge Lorenzo claimed his third MotoGP world championship with victory at the Valencia Grand Prix on Sunday as he withstood Yamaha teammate Valentino Rossi’s charge through the field.

Rossi climbed to fourth despite starting at the back of the grid as punishment for kicking Marc Marquez off his bike at the Malaysian Grand Prix.

However, Lorenzo held off pressure from Honda duo Marquez and Dani Pedrosa to lead the race from start to finish to overcome a seven-point deficit heading into the final Grand Prix of the season and claim the championship by five points.

With an estimated 110,000 MotoGP fans looking on Lorenzo crossed the finish line in a time of 40mins 59.364sec with Marquez and Pedrosa less than a second back in second and third respectively.

“It is possibly the happiest day of my life, the day when I have been most emotional. I was crying during the whole lap of honour for the emotion of how difficult this title was to win,” Lorenzo told Spanish TV station Telecinco.

“We were always behind and then in the last race it all went perfectly.

“The tyres were destroyed and I had to ride very carefully in the final lap to not crash.

“The truth is I didn’t look at the boards with the times and number of laps throughout the whole race and when I saw the chequered flag I could finally breath calmly.”

Rossi cut through the back of the field with ease as he took just 13 laps to climb into fourth.

However, in doing so the Spanish trio of Lorenzo, Marquez and Pedrosa had built up an unassailable 11 second lead that only grew in the second half of the race.

All eyes were then on whether Marquez could pass Lorenzo at the front after his spat with Rossi in recent weeks when the Italian accused the two-time world champion of conspiring to help Lorenzo win the title.

With Rossi sure to finish in fourth, though, he needed both Hondas to pass Lorenzo to win the title.

Marquez remained glued to Lorenzo’s back wheel for the majority of the race, whilst Pedrosa made a late charge on the penultimate lap.

However, the battle between the two Hondas for second place eased the pressure ever so slightly on Lorenzo as he was able to negotiate a nervy final lap to secure his fifth world title in all categories with his seventh race win of the season.

“I tried to overtake and push in the last laps but when Dani overtook me we lost time there,” said Marquez.

“I tried to catch Jorge. I tried on the last corner to go inside but I saw that there was a lot of risk and I nearly lost the front of the bike.

“Second place is not the best way to finish the season and next season we will try to fight again for the title.”