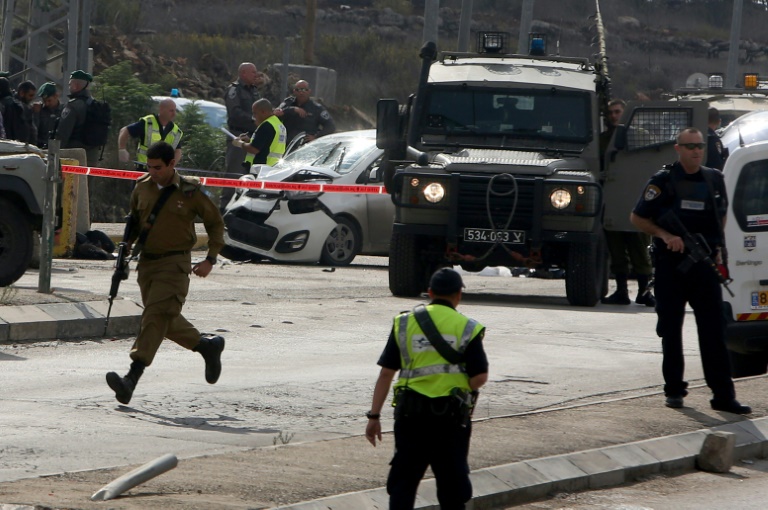 Car-ramming and stabbing attacks wounded six Israelis in the West Bank on Sunday while two alleged Palestinian assailants were shot, authorities said, the latest in a weeks-long wave of violence.

While violence had waned somewhat in recent days, the fresh attacks signalled that knife, gun and car assaults that began at the start of October were set to continue despite tough Israeli security measures.

The latest unrest came as Israeli Prime Minister Benjamin Netanyahu prepared to leave for Washington on Sunday to meet US President Barack Obama.

In the first incident, a Palestinian rammed a group of Israelis with a car at a junction, wounding four of them, and was then killed by security forces, police said.

The alleged attacker was said to have driven the car into an area south of Nablus where Israelis typically gather to hitch rides. A checkpoint is located nearby and Israeli border police opened fire.

Israeli public radio described two of the wounded as in a serious condition.

Later, a Palestinian woman stabbed a security guard near a West Bank settlement and was shot by the victim, the Israeli police and army said.

The incident occurred at the entrance to the Beitar Illit settlement south of Jerusalem. The fate of the woman was not immediately clear.

The victim, aged around 50, was stabbed in the stomach but managed to drive to a nearby checkpoint and was taken for medical treatment, authorities said. He is a resident of the Immanuel settlement in the West Bank.

The wave of attacks since the start of October has left 73 Palestinians dead, around half of them alleged attackers. Nine Israelis have also been killed as well as one Arab Israeli.

Unrest had appeared to be declining in recent days, but several attacks on Friday as well as clashes between Israeli security forces and Palestinians shattered the lull.

Much of the recent violence has occurred in the West Bank city of Hebron, where two Israelis were shot and wounded on Friday at a flashpoint holy site.

Netanyahu’s meeting with Obama will be centred on US defence aid to Israel following the July nuclear accord between major powers and Iran, but the recent Israeli-Palestinian violence is also expected to be discussed.

At the start of a cabinet meeting on Sunday, Netanyahu said he will speak with Obama about “possible progress with the Palestinians, or at least stabilising the situation with them, and, of course, strengthening the security of the state of Israel”.

US officials say however that Obama has lost any hope of a major peace accord being reached between Israelis and Palestinians before he leaves office in January 2017.