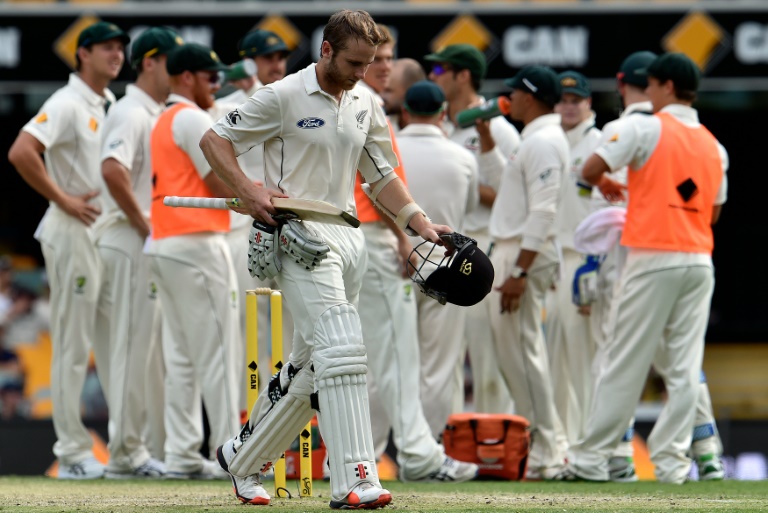 New Zealand’s hopes of stonewalling an Australian victory took a massive blow with the contentious dismissal of leading batsman Kane Williamson in the first Gabba Test on Sunday.

The accomplished Williamson took up where he left off after 140 in the first innings to reach his 50 off 55 balls but fell to a touch-and-go leg before wicket decision nearing tea on the fourth day.

At tea, the Black Caps were 142 for three chasing an improbable 504 runs for victory with Ross Taylor on 20 and skipper Brendan McCullum not out four.

English umpire Richard Illingworth gave Williamson out after he was struck high on the back leg from spinner Nathan Lyon and the Kiwi batsman called for a review.

Replays showed the ball clipping the very top of the bails and the umpire’s decision stood much to New Zealand’s chagrin.

Williamson had looked up to the task and efficiently dissected the Australian field with his crisp strokeplay. The Australian bowlers were unable to get him to play a false stroke up until his dismissal.

Martin Guptill, who took 24 balls to get off the mark, gave two chances and survived a leg before wicket review, before he was caught at slip off Lyon for 23.

Guptill was dropped before he had scored and again on seven.

Joe Burns had two attempts at short leg to catch Guptill off Mitchell Johnson before Lyon got his fingers to a hot chance above his head at point, again off Johnson.

Fellow opener Tom Latham was dismissed in the morning session, leg before wicket to Mitchell Starc for 29.

Latham had looked assured and hooked Josh Hazlewood for six before he fell to Starc, only minutes before bad light stopped play.

Latham did not seek a referral after consulting with Guptill and television replays projected the delivery would have hit leg-stump.

New Zealand have scored the highest losing total in the fourth innings of a Test with 451 when chasing 550 against England at Christchurch in 2002.