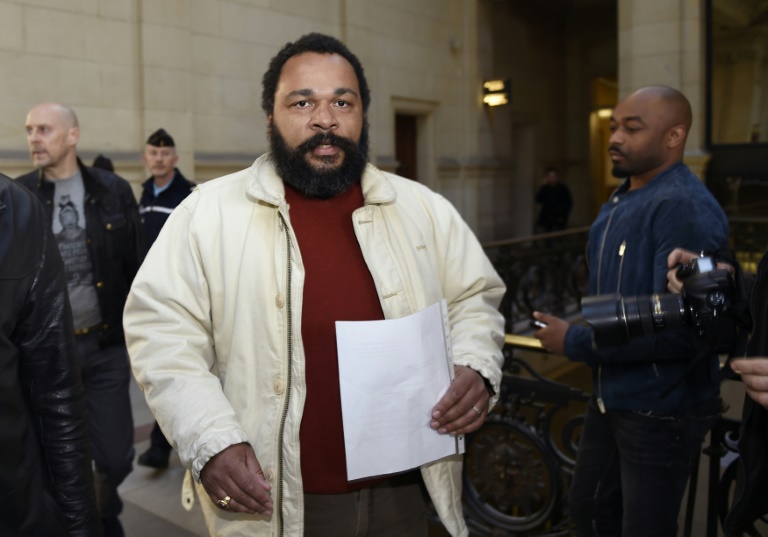 Controversial French comedian Dieudonne M’Bala M’Bala will appear at the European Court of Human Rights on Tuesday to protest the fine he received in 2009 for inviting a Holocaust-denier on stage.

The judges will decide whether the 10,000-euro ($11,000) fine he was given by a French court for “racist insults” was an infringement on his freedom of speech.

The comedian and political activist has been repeatedly convicted in France on anti-Semitism charges, and openly campaigns against the “Zionist lobby” which he claims is controlling the world.

He popularised a hand gesture known as the “quenelle”, which was criticised for resembling a Nazi salute. It went viral in 2013 and was used by footballer Nicolas Anelka during a goal celebration.

Dieudonne, as he is commonly known, was also photographed embracing former Iranian president Mahmoud Ahmadinejad in February, and presenting him with a “Quenelle Award” for his “anti-Zionist” efforts.

The case before the European court relates to a show in December 2008, when Dieudonne invited Holocaust denier Robert Faurisson on to the stage at the Zenith theatre in Paris, and presenting him with a prize.

He later defended himself in court, saying: “It was very funny”.

The French judges disagreed, saying the show had “crossed very far over the line of what is acceptable in humour”.

His lawyer, Jacques Verdier, told AFP the case was part of the “anti-Dieudonne paranoia” in the French judicial system.

“The question is to know whether there is, in a democratic society, the right to impose limits on freedom of expression in cases where they attack human dignity,” said Pierre Mairat, lawyer and president of the Movement Against Racism, who was a civil party during the French trials.

He said he would be “appalled, amazed, stunned” if the European court did not reject Dieudonne’s appeal.

The Strasbourg-based court has a record of strongly condemning anti-Semitism and Holocaust-denial.

It is not the only case Dieudonne has pending at the court, with an appearance due in the coming months over the decision by French authorities to cancel three of his shows in January 2014.