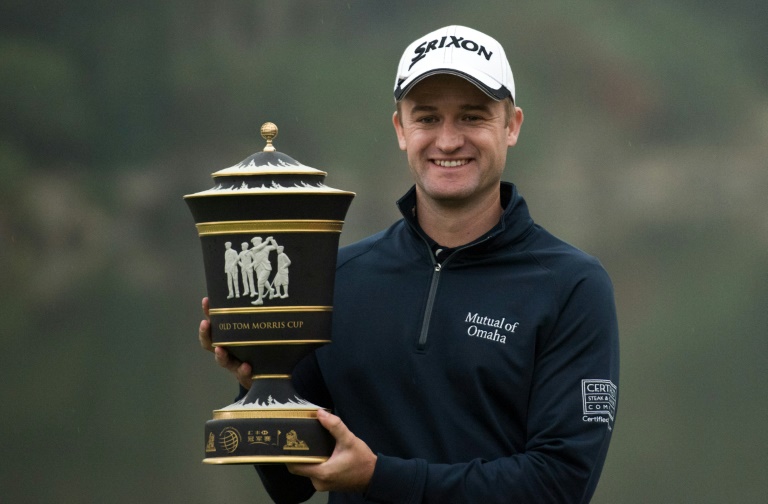 An emotional Russell Knox said he was “speechless” Sunday after becoming the first player in history to win on his World Golf Championships debut.

“Winning any professional tournament is a massive accomplishment,” Knox told a news conference after his two-stroke victory against a world-class field in the $8.5 million WGC-HSBC Champions in Shanghai, also his maiden victory in a US PGA Tour event.

“You’re never quite sure if you’re ever going to (win) because there’s so many incredible players. To come and be on top this week is a dream come true, and I still can’t quite believe I’m here.”

His final four-under par 68 gave him a total of 268, 20 under par. Kevin Kisner of the US was second on 270, while English pair Danny Willett and Ross Fisher tied for third a further stroke behind.

It was a week of firsts as Knox became the first Scotsman ever to win one the four big-money WGC events, which rank second only to the majors in prestige.

The victory also came on the America-based 30-year-old’s first trip to Asia following his appearance in the PGA Tour’s CIMB Classic in Malaysia last week, where he tied for 21st place.

“As a kid I don’t know if I ever would have guessed I would have been on the PGA Tour winning a huge tournament like this,” he said.

“I’m speechless. This is going to take a long time to sink in.”

Ten years ago, Knox moved from his native Inverness to college at Jacksonville University, Florida, to pursue his golfing dreams. He paid an emotional tribute to his coach and mentor there Mike Flemming, who died two years ago.

“I owe him everything. He was my coach for eight years, and he passed away a couple years ago. He’s been my inspiration and he taught me everything I know. It finally paid off.”

With superstars such as Jordan Spieth and Dustin Johnson breathing down his neck Sunday at Sheshan International Golf Club, Knox remained remarkably composed to card six birdies and just two bogeys en route to the $1.4 million winner’s cheque — the biggest pay day of his career by some distance.

“I was quite calm, actually, way more than normal to be honest,” Knox said. “But at the same time, it was the most nerve-racking thing I’ve ever done.

“I tried not to watch Dustin (Johnson) play, especially the front nine, just because we are in two different worlds. He’s hitting it 50, 60 yards past me off the tee.”

The victory propelled Knox to third in the US PGA FedEx Cup standings and almost certainly would have caught the eye of European Ryder Cup captain Darren Clarke.

Knox is not a member of the European Tour and so would be ineligible for next year’s showdown at Hazeltine unless he joins the tour.

“Obviously it’s going to be a goal of mine to make the European Ryder Cup team,” said Knox. “But I have no idea where I stand or what I need to do to make the team. But I look forward to finding out and giving it a run.”