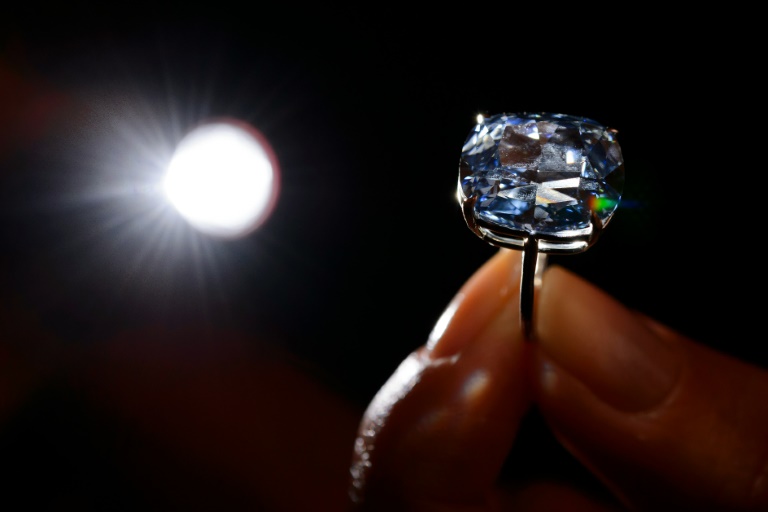 Huge blue and pink diamonds, the star attractions at major jewel auctions in Geneva in the coming days, are expected to fetch tens of millions of dollars and possibly set new world records.

The anticipated sales prices for the two stones are part of a trend that has seen the market for coloured diamonds explode, with values more than doubling over the last two decades.

“The biggest reason is the scarcity of these coloured diamonds,” explained Rahul Kadakia, the International Head of Jewellery at Christie’s.

He said that 25 or 30 years ago, extraordinary coloured gemstones often earned strong prices at auction, “but they weren’t quite making the prices they have been achieving in recent years.”

While classic white diamonds once made up the prize lot at jewel sales, now, according to Kadakia, “there is a little bit of softness in the white diamond market.”

The Sotheby’s “fancy vivid” blue diamond, which goes under the hammer on Wednesday, has been tipped as a possible world record beater, with the auction house listing its projected sale price at between $35-$55 million (32-51 million euros).

The flawless “Blue Moon” stone was discovered in South Africa in January last year, and is the largest cushion-shaped stone in that category ever to appear at auction.

The head of Sotheby’s international jewellery division, David Bennett, has called the Blue Moon “a simply sensational stone of perfect colour and purity.”

Sotheby’s rival Christie’s puts its prized jewel up for sale on Tuesday at the plush Four Seasons des Bergues hotel.

The cushion-shaped stone, dubbed “In the Pink”, is estimated to sell for $23-28 million, but Kadakia told AFP the price could be even higher.

He noted that the world record price per carat for a pink diamond was set in December 2009 by Christie’s in Hong Kong, when a five carat stone sold for more than $10 million.

If In the Pink, owned by an American family for the past 15 years, matches that per carat mark, it could fetch more than $32 million he said, noting that the jewel has been priced “well below what it is actually worth.”

Christie’s said that only three pink stones classified by the Gemological Institute of America as “fancy” and weighing more than 10 carats have been up for sale in 250 years.

The causes that turn a diamond pink remain something of a mystery, but some experts attribute the colouration to a simultaneous exposure to both heat and pressure.

Scottish actor Sean Connery is selling two jewels at Sotheby’s next week, including a 15.4-carat pink and orange diamond, which could fetch above $2 million and a ring boasting 5.18 carats of diamond, with an estimated sale price of $250,000.

Among the other exceptional pieces set to go under the hammer is an emerald and diamond necklace designed by Harry Winston in 1959 and previously owned by the American socialite and jewellery collector Dolores Sherwood Bosshard.

Kadakia said buyers descending on Geneva ahead of the auctions are increasingly aware that, at the elite level, precious stones have proven to be sound investments.

“If you look at diamond prices, a diamond that was making $200,000 dollars a carat is now making Â£2 million dollars a carat. That hasn’t happened in other asset class, or any other investment,” he said.