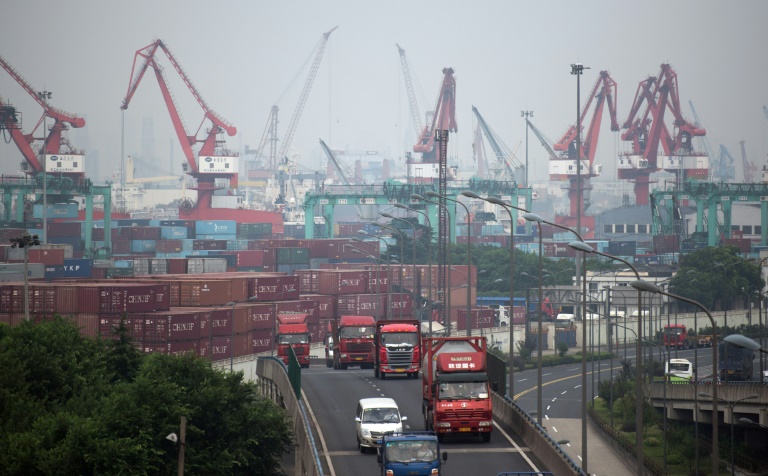 A key driver of world growth and the planet’s biggest trader in goods, the slowdown in China’s economic expansion has sent jitters across global stock markets and taken a great toll on resource-rich countries for whom the Asian country is a crucial client.

Exports, too, continued their losing streak from July, dropping by 6.9 percent year-on-year in October to $192.41 billion as foreign demand languished, according to figures from the General Administration of Customs.

The decrease in exports was larger than a median forecast of a 3.2 percent decline in a Bloomberg News survey of economists.

The October trade surplus rose to $61.64 billion, driven by the continued drop in imports, the data showed, suggesting that the Asian giant continues to struggle with improving domestic demand.

Doldrums in China’s property market, overcapacity in the manufacturing sector and slowed government spending in infrastructure have contributed to the country’s economic slowdown and contribute to decreasing demand for commodities, like coal and iron, used in heavy industry.

While falling prices have been a major factor in driving China’s import numbers down, the data also show decreasing demand for major industrial commodities.

Coal imports have dropped almost 30 percent in volume and 45 percent in value over the first 10 months of the year, measured in the local currency, the data showed.

Beijing aims to rebalance the economy to a sustainable model where expansion is predominantly driven by domestic consumer demand, but the transition is proving bumpy.

Botched stock exchange interventions and a sudden currency devaluation in August have rattled confidence in the country’s leadership, whose legitimacy rests on maintaining an aura of economic infallibility.

Last week, Chinese equities entered a bull market, with the Shanghai Composite Index rising over 20 percent since the end of August, a hopeful signal that investor confidence is on the upswing and could drive increasing consumer confidence.

Chinese President Xi Jinping this month said annual expansion should be no less than 6.5 percent in 2016-2020 if the country is to double GDP and incomes compared to 2010 levels by the end of the decade.

The comments are the clearest indication yet that Beijing will reduce its target growth rate from the current “around seven percent”, after expansion slowed in the July-September period to 6.9 percent, its slowest pace in six years.

Gross domestic product increased 7.0 percent in each of the first two quarters this year following growth of 7.3 percent for the full year of 2014, which was the weakest in nearly a quarter of a century.